Share All sharing options for: Saints Suck at Reminiscing

Not too long ago we were all treated to hear Jim Haslett man up and admit he made a big mistake during his tenure here in New Orleans.

"We had a chance to go to the playoffs, and I got hard-headed because Aaron Brooks got hurt, " Haslett said to Rams beat reporter Jim Thomas in an interview with the St. Louis Post-Dispatch this week. "I should've put the backup in and didn't. Everybody wanted the backup in, and I didn't. In hindsight, I probably should have, because the backup turned out to be a pretty darn good quarterback, Jake Delhomme."

Five kickers later and none on the current roster, Sean Payton has even come clean during his tenure thus far.

Payton has admitted that he never should have let reliable veteran Carney go after the '06 season, when he tried to upgrade to the stronger-legged Mare.

We know the Saints have perennial victims of poor decisions, bad luck and just plain stupidity since the dawn of the organization. I don't know if Mike Ditka was ever apologetic about the Ricky Williams/draft pick fiasco but I think we all know what category that falls under as well, though Ditka got his due. That's our thing and nobody does it better than us and by now we're all used to it. But it does raise a lot of questions.

At what point does it end? How long do Saints fans have to endure this? Will we suffer more years of this before wising up and finally making a change? I applaud Payton for at least admitting his mistakes during his tenure and not years later but the fact is the mistake was still made and here we sit without a shred of confidence in our kicking game. 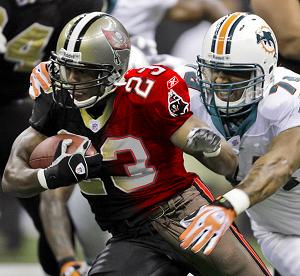 Are we wasting talent too? (MtnExile)

The most important question, however, is this: What the hell else are we screwing up right now as we speak that is keeping this team from achieving its potential? I would hate to see Pierre Thomas rush and catch for 2,500 yards next season...for the Bucs.

Of course, hindsight it 20/20 and it's easy to spot the obvious while looking in the rear view mirror. Making necessary and positive changes while it's not too late is a challenge that takes not only intelligence but honesty with yourself and the courage to do so. That is what makes a good coach. Being able to make those changes before they even happen is what makes a great coach. Does Payton have either of those abilities? We've seen new Niners head coach Mike Singletary's reactionary comments this past weekend and I think many of us are pretty impressed. Perhaps it's more like jealousy.