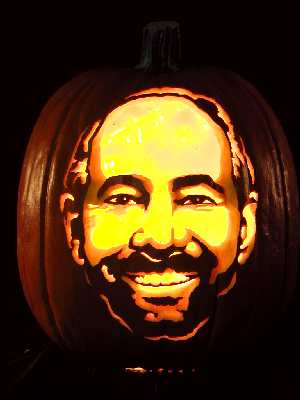 How appropriate for the season.

As you can see from the countdown clock on the right sidebar we are now under 5 hours until kickoff. While this is a time to be extremely excited - and I am now! - it is also a time for mourning. For most of you who aren't fortunate enough to attend the game like myself, that also means you are less than 5 hours away from being forced to listen to the ear-piercing and incessant noise that is Tony Kornheiser's voice. Here is a little snippet I found on the web today. It's from a while back and it is Tony giving his opinion on bloggers. Of course this hits home for your's truly and this is a fine example of one of the many reason's why I can't stand Kornheiser.

It's a real, it's a real mistake, and it happens. And I don't want to single anybody out in this area, but, you know, some people sit at home and they watch TV and they watch radio and they "blog" about certain "things," and they think they know what they're talking about, and they think they have sources. They have no sources. They make stuff up. They're toads. They're little toads. Actually, they're pimples on the behind of the greater body politic in this country and in this city (everyone in the studio cackles for no reason). And because, because they have access to airwaves and three or four people read them, they think, 'Oh, I'm very important.'

In fact, in fact, if a huge dumpster landed on their mother's house (cackling), and got all the way into the basement and crushed them (more cackling), nobody would care. Nobody would miss them. They provide nothing good, no service that's any good at all. They, they are, they are, they are sucking mole rats (more cackling), and that's the nicest I can be to them. But because, because they have a name, or, you know, because they get feedback from others, you know, they think they're very important. Randy and Paula think the show can't go on without them.

So now that I have warmed you up a bit for tonight with some of Tony's humour and wit (not), I deem this the official "Make fun of Tony Kornheiser" thread. Wanna rant about how much you hate him? Do it here. Wanna take an old "Yo Momma" joke and replace "yo momma" with Tony Kornheiser? Let it fly. Wanna talk about what you will do tonight while watching the game to avoid listening to Tony and gouging your eyes out with a dull spoon? We all wanna hear it. I will try and get things started.

Tony Kornheiser is so annoying/bald/ugly/stupid that...(you fill in the rest).