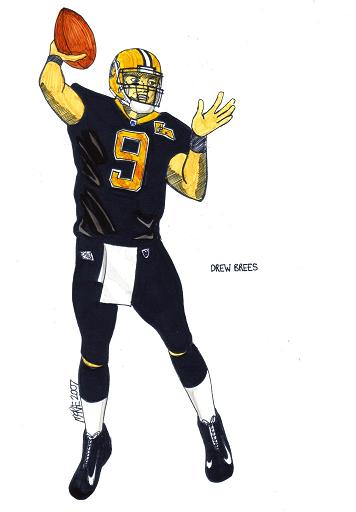 Can he do it? (Photo Source)

With all the attention going to the Saints running game the last few weeks, poor ole Drew Brees has been somewhat forgotten as of late. It's easy to forget a guy when he's just always dependable and always impressive. But in case any of you out there forgot, Drew Brees is still on pace to break Dan Marino's single season record for most yards passing.

But it won't be easy. I hate to be Debbie Downer here but things aren't looking so good for Drew. A quick glance at CSC's handy-dandy "Brees Stat Tracker" on the right sidebar would indicate that everything is looking good. Check out Dan Marino's performances in his final three games of that 1984 season though. Marino finished up his record breaking season very strong, throwing for 470, 404 and 340 yards consecutively to close out the year. Drew Brees currently stands 985 yards shy of breaking the incredible record with only three games remaining in the season. The clock is ticking. While it's totally possible that the super-human Brees could get most, if not all, of that yardage in one single game (what?), realistically it will have to be done at an average of 328 yards per game. While that is completely within the scope of Drew Brees' talent, a few factors are not working in his favor.

First of all, history is not on his side. Drew's average yds/game while on the Saints is 289.4 which is better than his 243.2 yds/game career average. While impressive, that won't get it done so he will have to step up his game and hope for a little help from his receivers.

Fortunately, two of the three remaining games are in a dome stadium. Unfortunately, this Thursday's game will be on the frigid tundra of Soldier Field in the middle of December, the time of year that lends itself more to the running game and when the cold hands of wide receivers begin dropping more balls.

The other thing standing in Drew's way is the emerging success (finally!) of the Saints running game. I am going to go out on a limb here and just assume that Payton has finally realized the importance of a ground game and gained trust in the talented running backs he has. Let's also assume that Payton remembers the last game in Chicago in which Pierre had a field day during his coming out party. A pass-heavy gameplan might not be in the cards for the Saints on Thursday. If the Saints get down and need to play catch up though, Drew would probably get the green light to start firing.

Thursdays game against Chicago will definitely give us a clearer picture. If Brees doesn't come out strong with a big game on Thursday, then the numbers he would need to put up in the final two games would just be incomprehensible. Whatever happens I can assure you of this...it's gonna be close. It will also be fun to watch. Drew will be a father for the first time any week now so we know he should be playing with lots of inspiration. And if the Saints wind up taking themselves out of the playoff race at any point in the next couple of weeks, at least all of us fans will still have something to root for.