Share All sharing options for: Saints and Panthers: Let the Battle Begin 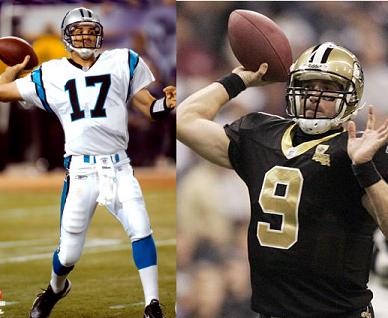 I thought about writing this post a couple of weeks ago when I read Peter King at Sports Illustrated rank all 32 teams for 2008,putting the Carolina Panthers at the #10 spot and the Saints all the way down at #16. I bit my tongue and chalked it up as one mans opinion.

Then the other day I read John Clayton's Five Surprise Teams to Watch in 2008 and there they were again, those pesky Panthers in the number one spot! The surprise team of next season and a possible division winner.

Using the same standards that allowed the Tampa Bay Buccaneers to win the NFC South last season, the Panthers should be the top surprise team. That status should give them a chance to win the division.

Finally, yesterday there was this article at Fox Sports where the Panthers were picked as one of five teams to be in the Superbowl finals this year.

With Jeff Garcia pouting in Tampa Bay, Carolina is ready to take the South. The Panthers' only tough games are the opener against San Diego and at the Giants late in the season.

The gauntlet has been thrown! I am officially labeling the Panthers as public enemy number one this season and declare them our nemesis for 2008.

Let's take a quick look at the division. Although the last four years of NFC South history would dictate otherwise, I don't think the Falcons are going to go from worst to first. Everyone agrees a great quarterback is necessary to have a great team, and barring an unexpectedly amazing season from one of their myriad of quarterbacks, Atlanta is a long way away from that. Thats just one of their problems. As far as the Bucs are concerned, nobody seems to expect a repeat performance of last season. Their division win last season was not convincing in the least.

This leaves our beloved Saints and the Panthers left to duke it out for first place next season if we are to believe the experts. With a pretty good draft, a healthy Delhomme and some free agency moves, the Panthers seem to be in as equally an optimistic mood about next season as the Saints. Check out this post from Cat Scratch Reader, our fellow Carolina Panthers SB Nation blog to get an idea of their hopes. No doubt, this is building up to become a rivalry to watch in 2008.

Regardless of Carolina's improvement I think the Saints have equally improved if not more and will have the better team. I'm not biased or anything, I'm just sayin'. What really bothers me is that last year the Saints were predicted to have an incredible season. Remember Sports Illustrated picking us to win the Superbowl last year? Yeah, thats right. Not just go, but win! Their claim was that the Saints would have an incredibly powerful offense and if their newly revamped defense could just hold up, they had a chance. Sound familiar? Thats because we are in the same position this year as we were last year. Still have the same great offense, still praying for our defense. Fortunately, our defensive additions seem even more promising than last years. So why don't we get the same love this year? Enjoy the spotlight while it lasts Carolina, because it can all turn against you in a heartbeat with an 0-4 start.

The two teams first face off in an early season match-up on October 19th. However, the game we all need to circle ninety times in red pen on our calenders is the final meeting of the two teams. It comes in the final week of the season. In the dome. Chances are incredibly good that it could be the most important game of the season with a lot riding on the line.