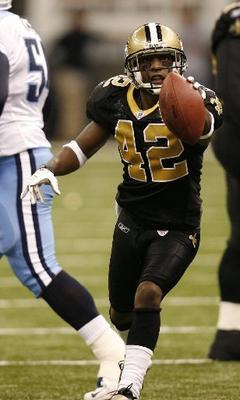 Yeah, thats right. I said it! I know, I know...I KNOW. I'm gonna get some heat for this one, but what the heck.

I said I know!

I will be the first to admit that I was very unhappy with Jason David last season. Said some unkind words. Referred to him as Chasin' David. Let's face it, he was a HUGE disappointment. He was the marquee free agent acquisition last year, much like Vilma this year, and his addition was to be the key to a much needed defensive upgrade. The realization that he wasn't started in the first game against the Colts when Manning picked on him multiple times, but I chalked it up to Peyton's prior knowledge of David's abilities having been on the same team previously. But as we all know, it continued as other teams seemed to prey on the known soft spot of the Saints defense until it became a running joke among fans and even the media. Line up your fastest and biggest receiver on him and let it fly.

But in my quest to be ever the optimist this season, I am going cut him some slack and join the "Jason David in '08" campaign. Or probably more likely, start it.

As far as the teams position on David, I think Mickey Loomis really sums it all up in the article from Sports Illustrated a couple of days ago...

"We have not by any stretch of the imagination given up on Jason David," says Loomis. "Jason had a tough year, a tough transition period, going from the [Cover 2] defense that the Colts played to the defense that we played. What we asked him to do, in terms of being out on an island and covering guys man-for-man more often than he did with the Colts, it took an adjustment period for him. But he's got the ability to be a good corner for us, and that's what we expect."

Really I can't say any more. That's all there is to it. Last year we signed him knowing he wasn't very familiar with our system. He came from Tony Dungy's Tampa 2 and had to switch to man coverage. While it may be easy to disguise a players flaws and harder to gauge a CB's real talent in a Cover 2 scheme, this was probably one of those situations Payton is known for; There was a quality player available in free-agency and Payton figured a talented player is just that, and a he should be able to adjust to anything in due time. Coach may have been a little off in regards to how long due time actually is.

I do think David is talented. Remember that Indianapolis game I mentioned earlier? He also snatched up a fumble and returned it 55 yeards for the Saints only touchdown of the game. We've got Brees, Bush, McAllister and Colston but Jason David is the only one who saw the end zone that night. He can make those plays on the ball. That was the reason Payton brought him here. Last off-season coach was all about making plays on defense, forcing turnovers and turnover ratio. Here are the teams leaders last season in forced fumbles, interceptions and pass deflections in no particular order. He's right in there. Per ESPN.

So Payton may have overlooked coverage ability a little. Maybe he got in a little over his head. But Jason David is a talented player and there is nothing that says he can't adjust. I know we all would have liked his transition to be quicker, but it just wasn't. Deal with it. He has another off-season to continue to pick up the nuances of a man-to-man system. I have full confidence that Sean Payton knows what he's doing and can help David be the player we all want. Am I naive? Um, there is definitely a chance.

Anyway, whether you like it or not, Payton and Loomis are going to stick with him. They stuck with him last season, and it doesn't look like they are going to do any different this season. It appears they will continue to look in-house for secondary help, not just try to add talent from outside. There are positives in Jason David's game. Plus, he's got experience and that goes a long way, especially when being compared to newbies like Tracy Porter and Usama Young. Dude does have a big shiny ring. The Saints seem to have faith in him and I, in turn, have faith in Payton and Loomis. Mostly Payton. With the aggressive "its now or never" attitude the front office has seemed to adopt this off-season I think I can comfortably say that if the team doesn't like what they see in David, they will go with someone else.

Let me put all of this another way...he's better than you (unless you are an elite NFL cornerback, in which case, you are awesome and please email me so I can interview you). So back up off him brah. CSC wishes the best for Jason David and hopes he proves all doubting Saints fans wrong this season, including myself. It's would be a win-win situation.

Alright, thats it. Let me have it!