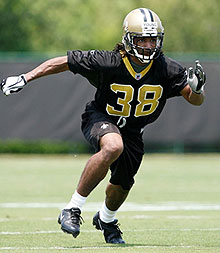 “Usama’s an incredible talent.  He runs in the 4.3's and jumps 43.  All he needs now is the opportunity to translate that athleticism onto the field.  My man led the team in special teams tackles as a rookie and looks to build on that success in 2008.”

That is how Usama Young's agent Nate Haber describes his talented player. Which is good, because Usama will certainly need to display all of his skills later this summer in training camp while battling for a spot at one of the most hotly contested positions this offseason, cornerback. Recently, CSC had a chance to talk with Usama. The following is what we discussed. Hope you enjoy.

Usama: I played 3 years in high school wearing 28, and my last year they lost my #28 and they gave me #18, and throughout my college years I just stuck with 18.  But then the Saints gave me 38.  I stuck with 38 for the year because I wasn’t thinking about a number.  I was just thinking about making my mark.  Now it’s time to go back with my #28 from high school.

CSC: How did you spend your offseason? Do anything fun, exciting or different?

Usama: Mainly traveling and seeing family.  That was how I wanted to spend my first offseason.  I hadn’t seen my brother in Cali in a while, my grandma in NY, my family in Maryland.  Got to spend time there and in Indy with my mother.  Went to Ohio to see some old friends and teammates, and of course, Vegas for my brother’s birthday celebration.

CSC: Who has stood out so far this offseason at OTAs and minicamp?

CSC: Are you ready for training camp…and the heat?

Usama: I’m definitely ready for it, excited about it, but at the same time I’m gonna enjoy my time off.  It’s pretty hard to prepare for the heat, but you know it makes you stronger going through it.  I’m more excited to start the season.

Usama: Favorite part is when we break meetings at night (laughs).  When we get to go back to the dorm room and lay back down.  The least favorite is the early morning wakeup call.  Once you get out on the field it’s all fun and competition though.

CSC: Cornerback is one of those positions that everyone will be watching with the hopes that it will be improved and it’s a tight, crowded race. You nervous?

CSC: Have you been learning a lot from veterans like Aaron Glenn, David Patten or Mick McKenzie?

Usama: Aaron Glenn has been very helpful.  His route recognition is great.  You can see him on the field, he knows where the receiver is gonna go.  D. Patten, I ask him for advice and his knowledge because he has gone against the best in his career, so he’s been helpful.  He’s given me advice to help me get to the next level.  And Mike has been helping me since I arrived last year.  He’s been critiquing me this offseason and helping me improve my game.

CSC: A lot of people, including myself, think you show a lot of promise and that this could be your breakout season. I assume you agree?

CSC: The front office was pretty aggressive this offseason; signing some key free agents, twice moving up in the draft and giving certain players the big contracts they wanted. How is everyone in the locker room feeling about this season? I don’t want to jinx it but, ya know, is this the year?

Usama: Everyone is feeling good, yes.  We've been working hard and we want it to pay off.  The front office has been making moves and hopefully it helps to improve upon last year.

CSC: What game do you have circled on your calendar this season?

Usama: We've got a few. We get to go out to London, my first time overseas.  I get to go home to Washington to play the Redskins.  People been hitting me up already about that game.  Green Bay and Denver, I get to see one of my former teammates from Kent.  Like you said, it’s gonna be an exciting year.  And that game in London, man I can’t wait to play out there.

CSC: What has been your most memorable moment as a Saint so far?

Usama: That first game against the Colts when I stepped on the field.  It was like “Wow, I’m here.  I’m finally here.”  It’s what every kid dreams of, playing football and playing at the highest level.  I wasn’t heavily recruited out of high school.  I went to a small school at Kent State and people thought we didn’t play against elite talent.  Then I wasn’t invited to the Combine.  But then being drafted 66th overall was an amazing feeling, and then finally stepping out there for my first professional game was incredible.  I was in awe.

CSC: Who is the toughest receiver you have faced? What makes him so tough?

Usama: Steve Smith.  He runs great routes and is untouchable in the open field.  He blocks well for a smaller receiver.  His motor is always running.  I go up against some of the best, too, everyday in practice, but yeah, I’d have to say Steve.

CSC: Were you nervous about what to expect coming to play for the Saints in New Orleans after the storm?

Usama: No, I looked at it as an opportunity to help a city on the rise and playing a major role in helping them rebuild.  As a member of the Saints, we’re part of the community.  We help others who have suffered.  They have gone through more than you could ever imagine – losing their houses, their loved ones.  I wanted to help these people, including my sister who was staying out there too.

CSC: Who is the most fun in the locker room? Who are the leaders?

Usama: Man, there’s so many leaders.  Let me think of the characters... Mike McKenzie’s a character.  Charles Grant, he’s a character.  We got a whole lot of different clowns on the team who keep us loose.  They keep a smile on the guys’ faces.  There’s a lot of leaders too.  Drew’s a great leader, he’s a hell of a player.  Will Smith is one of those leaders by example, constantly working.  David Patten leads.  Marques Colston leads.  Deuce is another, just to name a few.  We have a ton of guys who do a great job on this team.

CSC: What is your game day routine?

Usama: Night before, calling my father and praying.  Watch some film.  I make sure I get to sleep early for a noon game.  We get a wakeup call at 7am.  Eat breakfast with the team and head to the stadium.  I’m a candy fiend, so gotta have some Skittles before the game.  Get to the field early for warm-ups and drills, stretching, talking to some of the guys and then going out there and making it happen.

CSC: What are your favorite activities to do in New Orleans?

Usama: Gotta say eating.  They got so many restaurants down here.

CSC: What do you think about the food down here? Whats your favorite restaurant?

Usama: They’ve got great seafood down in this city.  My favorite restaurant is Montrel’s Bistro.  They better give me some free food from now on (laughs).  It’s a small, family-owned spot with a lot to choose from.  Great food.

CSC: Anything else you want to say or let Saints fans know?

Usama: Looking for a Superbowl this year, baby.  New Orleans deserves it.  We truly do have some of the best fans in the country.  Everywhere we go, there are Saints fans supporting us.  We really appreciate y’all and hope to make the city proud this year.

CSC would like to thank Usama Young for taking time out of his busy schedule to answer our questions and we wish him luck in training camp and the upcoming season. For more info on Usama check out his official website.