Share All sharing options for: Carolina is the Favre-ite 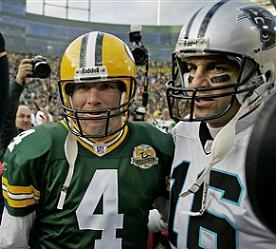 The Panthers are not averse to old quarterbacks. (Photo Source)

By now I am sure most of you have heard (how could you not?) the Brett Favre rumors swirling around. The possibility remains that we may not have seen the last of #4 and his jersey retiring ceremony in week 1 may need to be postponed.

If he returns to the game of football, Brett Favre would still be a Green Bay Packer. Whether or not the Packers organization want to have him play another year is up in the air. Quarterback Aaron Rodgers has been waiting patiently for his chance to take over the reigns, and the team has finally accepted that this is the year. Bringing Brett back to play another year might be taking a step backwards. If the Packers decide to stick with Aaron Rodgers, Brett would inevitably demand to play somewhere else.

If the Packers release him the question then becomes, "Where will Brett play?" The initial speculation was that Green Bays NFC North rivals the Minnesota Vikings and Chicago Bears were the top prospects. Both are seriously lacking reliable quarterbacks and the addition of Favre could be just what they need to take the next step. That scenario seems unlikely given the relationship between the three teams but man what a story that would be!

The latest gossip amid Favregate is that Carolina is the most likely landing spot for Brett. The Panthers made some pretty good moves this offseason and had a great draft. Some "experts" think they have a chance to win the division but Delhomme has not been short of spectacular as of late and this year he is coming back from missing almost all of 2007 due to an elbow injury. A future HOF quarterback like Favre, who seems to have a little left in the tank, could be exactly what the Panthers need to get to that next level.

Obviously none of this matters if Favre doesn't return to football, and that has yet to be seen, but what do you guys think? What if Favre did find his way into a Panthers uniform? How much of a possibility do you think there is of this happening? Is that something that Saints fans should be worried about? Speak up!