The Saints have finally started the process of signing their 2008 draft choices and the first was yesterday when the Saints and DE DeMario Pressley agreed to a deal. The Times-Pic broke the story. No details on the contract other than the fact that its for 3 years.

And so it begins. 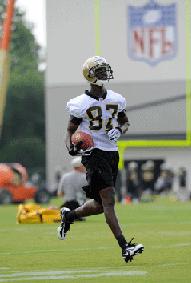 The Times-Pic also had this article, which gives us their attempt at predicting the final 53 man roster. As expected, the most interesting decisions came at the cornerback and receiver positions.

CB Jason Craft was the hardest guy to project because he could wind up as a starter or a casualty. If McKenzie is healthy, though, I don't see six cornerbacks making the roster. Veteran Aaron Glenn is in that crowded mix as well.

DT Kendrick Clancy didn't make my list, but he could easily beat out Thomas, Lake or Pressley.

Not sure I agree with Arrington, but someone has to go. I think its a little too early to really be picking who will make it, but this was all done in fun. What do you guys think about it? Is Arrington in or out? Is Craft in or out?

Right here you can find a position by position breakdown and analysis from CBS Sports in preparation for training camp. Not really too much new here.

Another article on former Saints center Jeff Faine and his new team, this time from the Orlando Sentinel. They are really excited about him down there in FLA aren't they? This was a funny part about Jeff Faine and Chris Hovan talking smack to each other on the line in seasons past.

"There definitely were some words passed between the two of us during those games -- and a lot of it from my end," Faine said recently. "But it was good. I enjoyed it. And I bet he enjoyed it, too."

"We looked at each other, kind of smiled, and basically both said, 'OK, what the [expletive],' and shook hands," Hovan said. "The guy is a warrior, and I'm glad he's my teammate now."

You can find two photo galleries here and here from the Manning Passing Academy courtesy of the Lafayette Advertiser. Many of them are actual students. I have posted some of them in the FanShots. There you can also check out a photo of Kim and Reggie from their day at Six Flags.