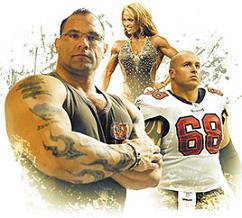 They even came up with a movie poster-like picture. Sick! (Photo Source)

In what continues to play out like the script of a Law & Order episode, there is more information regarding the whole David Jacobs murder suicide that occurred last month in Plano, TX. Just when you thought it was all over...it gets even more interesting. The Dallas Morning News has the story, and its a long one, but its a good read. There is also a video interview with Jacobs on the page.

It turns out that Amanda Earhart-Savell, the woman David Jacobs killed before taking his own life, was in love with current New Orleans Saints center Matt Lehr. The article claims that this could very well be the reason Jacobs turned to violence. Here are some of the unbelievable details.

"She was in love with me, and I loved her," Mr. Lehr, 29, said in a recent interview, acknowledging for the first time his relationship with Amanda Earhart-Savell, a 30-year-old professional figure competitor and fitness magazine cover girl who also had dated Mr. Jacobs on and off since last year.

Mr. Lehr said he met Ms. Earhart-Savell through contacts in the close-knit bodybuilding community about a month before she began dating Mr. Jacobs.

"We'd randomly e-mail each other," he said. "She would wish me good luck for the games. Nothing too serious."

"We really started to like each other. But, you know, as the situation went, we had to protect each other and make sure everything was calm," Mr. Lehr said.

It wasn't long before she was traveling to New Orleans to meet with Mr. Lehr, who on March 19 signed a contract to play on the Saints' offensive line after leaving the Tampa Bay Buccaneers.

All along, though, Mr. Jacobs was suspicious. More than once, while looking at her cellphone, he found text messages from Mr. Lehr, which she explained away as unwanted advances, Mr. Jacobs told The News.

In late March, Mr. Jacobs was distraught to find an unsigned letter in his mailbox, taunting him. "Bro, Matt Lehr is [expletive] your ex-squeeze," it read. "Do the math."

Another blow came in early April, when Mr. Jacobs noticed that Mr. Lehr was one of Ms. Earhart-Savell's top friends on her MySpace page. He immediately e-mailed his attorney, Hank Hockeimer, in Philadelphia.

"I am so upset I don't know where to start," Mr. Jacobs wrote April 4, according to the e-mail conversation, which Mr. Jacobs later forwarded to The News. "I am devastated. After all I have been through, this just tops it all. This really hurts so much."

The same day, Mr. Jacobs told The News that he recently "got 20 minutes into the drive to Lehr's house [in Denton County], then turned around." He said at the time he didn't want to do "anything stupid."

Geez. Matt Lehr was so close to possibly being killed and he didn't even know it. This whole thing is insane.

"It wasn't the right time," Mr. Lehr said they agreed. "We knew that we wanted to be together. It was very hard. We both loved each other. Did we like the decision we made? No. Did it help us become closer? Yes. We talked every day."

Mr. Jacobs returned to Plano on Monday, June 2. That night was the last Mr. Lehr heard from Ms. Earhart-Savell. "Sweet dreams," he says he texted her.

For two days, no one heard from her.

On Wednesday, Mr. Lehr made a worried call to Ms. Cooke. She, too, hadn't heard from her sister, so she called the police.

Everyone feared she might be at Mr. Jacobs' Honey Creek Lane home. When family arrived there before dawn the next morning, they saw police cars. "They told us it was two bodies," Ms. Cooke said. "We knew."

"I had to go to practice that morning," he said. "I was in shock. I started breaking down in the weight room."

Shock was quickly followed by guilt, he said.

"Right when it happened, I was like, 'Why didn't I have her just move in with me if I felt so deeply about her?' " he said. "Then, you start hearing rumors like, 'I hear he found out about you and her and couldn't handle it.' How do you take that?"

"When you lose someone close to you, it's a battle every day," he said. "There hasn't been a day yet that I haven't broken down. She was an angel. This is someone who had her life taken trying to help someone else.

"God bless her for trying to help somebody who couldn't be helped."

I really feel bad for Matt Lehr now. At first I figured he was a lucky S.O.B. because David Jacobs' suicide possibly saved Lehr from prosecution but now he has turned into a victim. And that poor girl. She was really just trying to help. I wonder if there is anything more to the story that we still don't know. At this point, anything is possible. I know I have said this before, but who could have thought all of this would happen.

The Sporting News released their NFC predictions by division and they've got the Saints winning the division.

1) New Orleans Saints (11-5). The additions of Jonathan Vilma and Sedrick Ellis will improve their defense. Drew Brees directs the short passing game as well as any quarterback. The Saints march back into the postseason.

Unfortunately, we lose to the Giants in the wild-card round of the playoffs.

Speaking of predictions, the Times-Pic had a piece about how all of the football experts and magazine publications have high expectations for the Saints. We already knew that.

Houma Today had their usual Sunday morning article yesterday. Really there isn't much here. Just saying that the Saints have talent and they need to get back to 2006 form and it relies heavily on the defense improving.

I forgot to give this one to you guys a few days ago. It's from ESPN Insider and they rank each teams running game. They rank the Saints at a lowly 22. Ouch. Here is what they say.

22. New Orleans Saints
Although they have some big names in the backfield, it is hard to rank the Saints much higher. Deuce McAllister can't stay healthy and Reggie Bush is not a quality starter because he is not effective between the tackles. The most productive or at least the most consistent back last season was journeyman runner Aaron Stecker. Plus, Pierre Thomas is a young player with talent. This unit is four deep, but lacks a quality starter who can pound the rock.