Welcome to the Drew Brees edition of CSC's Saints News.

Starting us off is the Sporting News and their list of the Top 25 quarterbacks in the league. In the #4 spot is our very own Drew Brees.

4. Drew Brees, New Orleans Saints. A couple seasons removed from the Saints magical postseason run, some forget about Brees, but he is the straw that stirs one of the league's the most prolific passing attacks. Last year, he did it without a running game.

Have you noticed that he is always in the number four spot? He really should be #3, at the least. He is #1 in my heart.

More Drew Brees love coming from The Sporting News. This time they list their five players they would love to see win the Superbowl. You know who they want to see win it all.

2. Drew Brees, QB, New Orleans Saints. Brees should be seen as much more than the savior of the Saints' franchise -- his consistent excellence in San Diego and New Orleans the past four years puts him just a notch below Tom Brady and Peyton Manning.

Brees wasn't that far from the big game in 2006 when most of his key Saints teammates were healthy and provided great support. With a shorter injury report and an upgraded defense, the Saints have a chance to rebound big in '08. Brees was a prolific producer and winner in college, and his play is worthy of him breaking through now as a seasoned pro.

He really does deserve it. Certainly more than any of the other guys on the list in my opinion.

Just when you thought you couldn't get enough Drew in your diet, the Times-Pic brings you a little more. This quick article talks about his recent USO trip and why Drew is the greatest person, well...ever!

Okay, I'm not going to gush too much here, but have you ever noticed that Brees is always in the news, and it's always for something positive? I think Goodell should give this guy a medal (or at least a nice Christmas gift ... maybe a Wii?) for making his league look better in the wake of the Chris Henry/Pacman Jones tidal wave of negativity.

As for Brees, he apparently was tired of rescuing babies and solving world hunger and wanted to do something a little more low-key with his time by visiting troops in Afghanistan. Are you kidding me?

What a great credit to our city, and what a wonderful role model for our kids. You keep it up, Drew! (Okay, I lied about the gushing. Sorry.)

He is awesome, isn't he?

In other news, someone was released from the Saints yesterday and it wasn't Drew Brees. The New Orleans Saints official website reports that  the team has waived WR Titus Ryan, leaving them with 80 players on the active roster, the maximum number allowed by the league. They always seem to bury bad news like this at the very bottom of a contrastingly positive and upbeat story as if no one is going to notice it.

The Advocate released their five keys to success for the Saints to improve this year. Without further ado, here they are. Nothing earth-shattering here folks.

1. Do a better job against the pass.

5. Get more consistency out of the wide receivers.

There really is nothing to write about.

SaintsInsider.com opened up its mailbag and answered some questions from readers. Here are some of the highlights.

I don’t see any way this team finishes under .500 in 2008, unless it endures another rash of injuries or stumbles out of the gate. They’re my pick to win the division.

So is this is breakout year? Bush recommitted himself to the offseason program and by all accounts is in great shape. He appears primed to improve his per-season yardage numbers by at least 250 yards, and if he does I think he’ll improve his touchdown total and put himself in “breakout” territory. I think it has to happen this year or the Saints start re-thinking how they’ll use Bush. 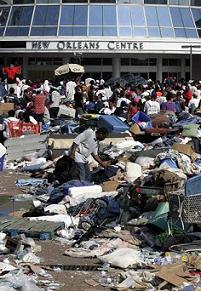 For those Saints fans who attend the home games, the Times-Pic has some good news you may like.

The state agency that runs the Louisiana Superdome and the New Orleans Arena has taken tentative steps toward purchasing a major piece of downtown real estate near the stadiums that eventually could become a glittering entertainment district with bars, sports-themed restaurants and other attractions.

The agency hopes by the end of the week to sign an option agreement for the New Orleans Centre, a group of three buildings that includes the Dominion Tower, the mall that once held the Lord & Taylor and Macy's stores, and a parking garage across the street from the Dome. The option gives the state 75 days to inspect the buildings, after which time it can purchase them or walk away from the deal with no obligation.

"We are excited about the potential to bring life to that part of the city, but we have a lot of work to do over the next 75 days, " said Ron Forman, chairman of the Louisiana Stadium and Exposition District,

"There has been no major development in this part of downtown since the mid-1980s, " Thornton said. "We have the potential to make a major investment."

You can also check out a cool training camp preview video in the multimedia section of the Saint official website. Sorry, there is no way to direct link it.

Today's Saints News segment was brought to you by...Drew Brees.