Yesterday was another action packed, fast paced day of excitement. Signings and extensions all over the place. I've got some good stuff for you guys today. See ya after the jump.

Here are two audio clips from the press conference with Mickey Loomis and Sean Payton last night. This is the stuff you really want. Pretty much every article in the papers today revolves around this press conference. The first is Mickey Loomis and the second is Coach Payton. Sorry about Bobby staring wide-eyed at you, there is nothing I can do about that. A little freaky I know, but hey, it's Bobby.

The written transcripts from these two press conference audios can be found here and here from the New Orleans Saints official website. Pro Football Talk also made a big deal about Loomis complaining about the agents. The Times-Pic had their summation of the days events, as well as The Advocate, the Sun Herald and the Clarion-Ledger.

Here are the main points everyone is discussing:

“Marques is a team-first player and a hard worker whose productivity over his first two seasons is unmatched in club history and we believe Marques can be even better as he gains experience in the league,” said Loomis. “We are very pleased to get this deal done and look forward to seeing great things from him over the next four seasons.”

For those of you who may have forgotten about the Shockey trade, just wanted to remind you he has to pass a physical before it becomes official. Fortunately, he already did says the NY Daily News.

Shockey, by the way, apparently passed his physical for the Saints yesterday. I earlier told you the physical was scheduled for today, but I was misinformed. The trade is now official.

More news about the The Great Trade of '08. ESPN has an article that claims Shockey's attitude played a huge roll in the teams decision to get rid of him.

"I think what my position will be and what I think the team will be ready to accept is the fact that the reason we won was because of team," Coughlin said a day before players reported to the University at Albany. "Team over self was why we won."

Coughlin believes the team mantra played into Shockey's desire to leave the organization after six productive years, ending up with the New Orleans Saints.

"I think that with the quality of the individuals that we have, the character of our team, that they certainly are going to realize that the attitude about believing in one another, about supporting one another, about the idea of taking the names off the back of the jerseys, that is what served us best last year," Coughlin said.

Moral of the story: Be a big baby and you will get what you want. 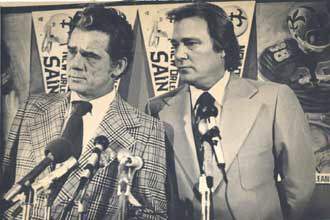 Mike Detillier had another great article at Houma Today, this time about the the very early years of the New Orleans Saints. It is through the eyes of everyone's favorite radio personality, Buddy D. This one is a must read, especially for the old school fans.

"I have covered Super Bowls, college football championship games, the World Series in baseball, the Kentucky Derby, championship prize fights and I have been in this business for over 40 years, and nothing has ever matched the excitement and anticipation I had for the 1967 season with the New Orleans Saints," Diliberto said.

"Since the NFL awarded New Orleans a franchise there has been a love affair with the people from this area and the team. Now, sometimes like in a marriage you get mad and you have a separation or you fall out of love for a time, but you always come back to them. The one thing you can say and never get an argument about is the fact that the Saints have given their fans many reasons to stray." 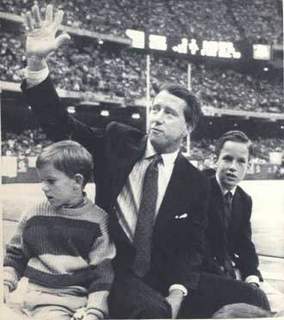 The future of football. Who would've thunk it? (Photo Source)

"What it is still hard to believe today is that as a region we were still recovering from Hurricane Betsy that devastated a lot of south Louisiana, the Vietnam War was escalating, the Civil Rights movement was on, tensions were at a high mark between the United States and Russia and the race to get to the moon was getting national headlines every day, but everywhere you went locally in 1967 all people wanted to talk about was the New Orleans Saints. The news of getting a pro franchise dominated everything else."

"I was told by a host of players and coaches alike not to fall for what I saw in pre-season because those teams were not playing their top players, but I got caught up in the buildup also," Diliberto said. "Then on the first play in the history of the Saints John Gilliam runs back the opening kickoff 94 yards against the Los Angeles Rams for a touchdown. I have never heard a stadium erupt like it did for Gilliam’s run. The noise level in old Tulane Stadium was off the charts. I turned to my left after Gilliam threw the ball in the stands and saw the commissioner of the NFL Pete Rozelle, the most powerful man in sports, cheering the kickoff return. And then I saw him wipe a tear away from his cheek. I get emotional thinking about this, because every time I think about that moment I think about all the fans who sacrificed their hard earned money and their fall Sundays to pull for a team that has given back so little in return.

Yet another training camp preview, this time from NFL Gridiron Gab. More of the same old. There was this little tidbit however.

Fullback Mike Karney is a ball-handler

On a nationally televised Sunday night game in 2006, America was introduced to fullback Mike Karney. A third-year pro at the time, Karney scored the first and second touchdowns of his career.

Karney actually found the end zone twice again in 2007: a one-yard TD run against the Bucs in Week 2, and a two-yard plunge against Carolina in Week 4. However, he is not Larry Centers.

In case there was any confusion, Karney is a classic lead-blocker. He’s rock-hard on contact….including when the contact is between his hands and the football. His balance as a runner is poor (like any fullback) and his range as a receiver is non-existent.

I don't think anyone thought Karney was a ball-handler. I also believe he scored 3 touchdowns in the Dallas game. I am pretty sure Stujo4 watches tape of that specific game twice a week and he might be able to back me up on this one.

Yahoo! ranked all of the NFL owners from worst to first. No shock that Benson was toward the bottom of that list.

29. New Orleans Saints – Tom Benson: It amazes me that Benson can’t even crack this year’s bottom three, not that he was any less awful than usual during the past 12 months. My favorite moment came last October when Benson, in the wake of a vote by owners to lower teams’ debt caps, told SportsBusiness Journal, “The union forced this, not us.” That contradicted Goodell’s earlier statement that the move had been made in response to turbulent global credit markets, instead suggesting its motivation was to reduce the amount of cash spent on player salaries in preparation for a potential lockout when the current collective bargaining agreement expires in 2010. In other words Benson, the chair of the league’s finance committee, made an implication that seemed to violate federal labor laws requiring good-faith negotiations. In February the NFL Players Association accused the NFL of collusion, the first such charge in the 15-year history of the current CBA. Two months later owners responded by voting to scrap the debt-reduction plan. Suffice it to say that no one at that meeting was doing the Benson Boogie.

Actually, I think he HAS BEEN less awful than usual the past 12 months. I am pretty happy with ownership at this point and I think most Saints fans agree.

Here is a cool YouTube video with Marques Colston at a photo shoot. It's kinda like the video I posted a while back with Pierre Thomas shopping in NYC. Enjoy

Since we've heard everyone else's take on the Shockey trade, I thought why not one more from some random guy in what appears to be a stationary store?

Someone call ESPN and get this guy a job!

Bleacher Report thinks the addition of Shockey may give the Saints the best offense in the NFC.

USA Today has a list of the top five most intriguing running backs for the 2008 season. Our very own Reggie Bush made that list in the number two spot.

2. Reggie Bush, New Orleans Saints: His first two seasons would have to be called disappointing considering how much excitement he brought to college football. Bush has not shown that same ability to dominate. However, no one is giving up on the idea that this guy can be a superstar. He has to scare defenses with his breakaway ability and he can do a lot of things. Some guys get that third-year burst and if Bush is one of those we could be looking at something special.

I get goosebumps when I think about Reggie actually breaking out. Intriguing indeed.