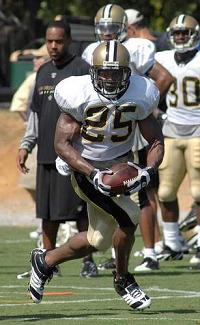 Check out the guns. (Photo Source)

I think we are going to start switching gears here and change up the format a little bit. Every morning I will recap the previous days events, then try and give you guys updates  and linkage throughout the day as camp goes on, so check back regularly! Sound good?

Here is what you need to know about training camp yesterday.

One thing I think is important to note is the fact that all but one person showed up to camp under the weight limit. That is fairly unusual and I think that shows how serious all of these guys are this season and how committed they are to redeem themselves after what could/should be considered a disappointing 2007 season. Very good sign.

The other thing I have noticed is that the media is all over Shockey. They are loving him and can't get enough of him. Seems he has quickly become the new poster boy of this team. I really hope this isn't the beginning of him just sucking the life out of this team and screwing up everyone's concentration. While I do think he could be great for this team, we should all remember that there are other people on the field and it takes each and every one of them to be successful.

It's still too early to make any predictions yet but things seem to be looking pretty good. The wide receiver battle is going to be very interesting. It's looking like David Patten might need to start worrying a little before he gets pushed down the depth chart.

One interesting thing I noticed...where the heck is my boy Pierre!?!? No mention of him at all yesterday. I guess as long as Deuce is still in the mix Pierre will continue to be looked upon as a backup. 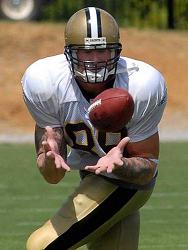 Here are the must reads from day one. Most of the days articles are based on these interviews and observations. There is too much to post here, so you'll have to click over.

Transcript of interview with Coach Payton from the New Orleans Saints official website.

Transcript of interview with Drew Brees from the Times-Pic.

Transcript of interview with Jonathan Vilma from the New Orleans Saints official website.

Transcript of interview with Jeremy Shockey from the New Orleans Saints official website.

Transcript of interview with Deuce McAllister from the New Orleans Saints official website. 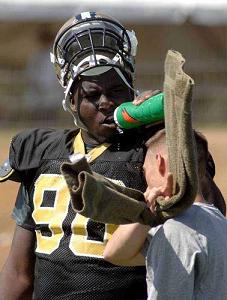 Meachem explained that he good felt about the first practice and that he played by the encouraging words his family advised him with of taking one day at a time, and make everything count. He mentioned that a lot of his teammates have served as mentors for him as he progresses into his second year in the league, including veteran receiver David Patten. Meachem explained that Patten was a big brother figure to him, and Meachem has leaned on him and picked at his brain for his knowledge concerning matters both on and off the gridiron.

"He’s like a bigger brother to me, a brother from a different mother," said Meachem. "He gets on me when he feels like I’m not doing my best, and he encourages me when I’m doing well. It works both ways, I give the same support to him."

Pressley began by stating that he felt good about the practice, and that he was gradually adjusting to the speed of the NFL. He said that many veterans have been helping along the way, including defensive linemen Antwan Lake and Brian Young. Pressley explained that it was a tremendous help that the three of them all use the three-technique.

He went on to say that it was crucial to sign with the team early, in order to show the organization that he had a lot of dedication and determination for making the roster. Early on in the full-team mini-camp in late May, Pressley suffered a foot injury and felt that the injury has slowed him down to the point to where he has to catch-up with the other rookies and younger players.

Pressley, sporting number 90, explained that when choosing his number, he decided to go with his high school number. At Dudley High School, in Greensboro, N.C., he wore number 90 all the way up to his senior year when he was asked to play both offense and defense, while wearing number 72.

For pictures from day one, check out the Clarion Ledgers website. They have a gallery of 45 pictures.  Half of them are of Shockey. It would be awesome if any of you guys could put some of them up in FanShots. Maybe you could split it up. That would be a huge help!

The New Orleans Saints official website has some videos up, but I have no way of linking directly to them or embedding them, so just head over to the main page and hit "multimedia".

Check out this video featuring Mike Triplett and Teddy Kider with a wrap up of the day from Jackson.

Jim Henderson is interviewed and discusses the first day of training camp in this video from WWL.

Here is the second post in Mark Campbell's new training camp blog "Soup of the Day" from the New Orleans Saints official website. These posts are great and are a must read. They are great for getting to know the players a little better on a personal level. It's also cool because we get inside Mark's mind and learn just what his thought process is throughout this whole experience. Here is Mark talking about the addition of Shockey.

Throughout my entire career, one thing is that I’ve never taken my job for granted. When I take that step on the field I realize two things: 1. Someone is trying to take my job and 2. Someone could embarrass me at anytime. In that mind frame during camp I have to go out and win a job, especially with the addition of Jeremy Shockey, who’s obviously a great tight end. I’m excited to have him as a teammate and watch him play. He’s one of the guys I enjoy watching play. There are always a couple of guys from the tight end position that you watch, just like any position. You want to see how they handle things, and he’s one of the guys that I watch.

I’m excited to have him as a teammate, and I think that we will work well together. We have over 30 years of experience between the tight ends in our room. There are a lot of guys that can play, and there are a lot of things that they can do. We each have our strengths and our weaknesses. We work hard to get the best things out of each guy to put together on the field. So this is obviously a spot that is going to make us better as an offense.

Some info about Colston's injury is to be had over at The Advocate.

“It’s pretty much precautionary stuff,” Colston said. “It’s a long season, so the training staff felt like it was best for me to ease in and get started on the right foot instead of setting myself back from Day One.”

“I was hoping it wouldn’t be an issue (during camp),” he said. “The Saints were gracious enough to look at my situation and reward me for the things I’ve done. I’m very appreciative and ready to get this season started.”

The Sun Herald also had a similar article.

KFFL did an impact analysis of Jeremy Shockey. This is what it they had to say in regards to the Saints.

Teaming up with Payton and quarterback Drew Brees may well equal big success in the Big Easy for Shockey. Brees is coming off back-to-back 4,000-yard seasons and enters the 2008 campaign with a star tight end for the first time as a member of the Saints. Brees, a former teammate of San Diego Chargers tight end Antonio Gates, is no stranger to taking advantage of the type of big target Shockey offers.

Indeed, Gates' most successful seasons, 2004 and 2005, were both while Brees was still on the West Coast. As the top receiving option in San Diego, Gates averaged 85 catches, 1,033 yards and 11.5 touchdowns per year during those two seasons. Although it's unrealistic to assume Shockey, likely the second or third option in the passing game behind receiver Marques Colston and halfback Reggie Bush, would be able to match those totals, it does offer a lot of promise. While Brees can reward a talented tight end, there has been a lack of talent at the position during Brees' tenure in New Orleans, which has been responsible for a lack of production.

In 2006, tight end Mark Campbell paced the position with a meager 18 receptions for 164 yards. As a group, New Orleans tight ends accounted for just 45 catches, 411 yards and one touchdown. By contrast, Shockey totaled 66 receptions for 623 yards with seven scores in '06.

Things improved significantly in 2007 following the arrival of tight end Eric Johnson, who hauled in 48 passes for 378 yards and a pair of touchdowns as part of a 76-catch, 710-yard effort from the position overall. In a down year, Shockey still managed 57 catches, 619 yards and three touchdowns during his 14 games played.

I thought they would send a reporter to Jackson, but still no information about training camp from NewOrleansSaints365.com.