Here is your roundup of the latest news and goings on from Saints training camp.

Houma Today had a nice article about Shockey and Colston and why the two of them together are a force to be reckoned with.

Shockey’s presence on the field gives quarterback Drew Brees a strong second option to throw downfield, and it should also take the heavy load off of the shoulders of wide receiver Marques Colston, who saw a tremendous amount of double-team coverage last season.

Even better is that by spreading the field and forcing teams to go to more nickel-coverage schemes, it will open up the running lanes for Deuce McAllister, Reggie Bush and Pierre Thomas.

The article then goes on to give some statistics about both receivers.

The end of the article also has some notes on which players have looked impressive so far and which haven't. On the impressive list are both Arrington and Meachem. DeMario Pressley...not so much.

Houma Today also had another article about the Saints. This one is simply about the fact that the Saints have made some nice offseason moves and have the ability to actually do incredibly well this season. It is all there for the taking.

Let it be known that Deuce McAllister does hold a grudge. This article from the Clarion-Ledger explains how the running back was snubbed in high school and wasn't picked as one of the 12 best football prospects in Mississippi, known as the Dandy Dozen.

"I'm still mad about it," McAllister said Friday afternoon after a New Orleans Saints workout at Millsaps. "It's the one thing I really wanted, individually, in football that I never got. It was a big deal to be on the Dandy Dozen back then. and It still is.

"I thought for sure I was going to be on it, but the call never came and then I picked up the paper and my name wasn't there. I was ticked."

"Part of it, I think, was being from a small school. Part of it was that I had been a wide receiver as a ninth grader, broke my collar bone as a sophomore, so my junior year was my first full year at running back.

"I had a good year but not a great year. But I still got invited to all the big camps around the country and I was getting offers from the Notre Dames and Tennessees, so I thought I would make it." 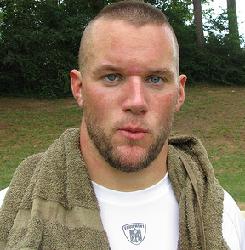 “As coach Payton says, ‘At the beginning of training camp there’s not light at the end of the tunnel,’” fullback Mike karney said. “It’s a very dark, dark tunnel. I guess that’s about as best as I can put it.”

“Camp’s a grind,” he said. “You got to have a little humor and I thought it would be fun. If anything I look at myself and laugh and, for anyone else on the team, they can look at me and chuckle.”

Sports Illustrated's FanNation had a quick write up about the Saints and their aggressive offseason.

In late April, the New Orleans Saints provided a behind-the-scenes preview of how they would approach the 2008 season. Working the phones during the NFL draft, team officials completed a trade to move from the 10th spot in the first round to No. 7 so they could select Southern Cal defensive lineman Sedrick Ellis. Thrilled that they got their man, the Saints then went for the double whammy, calling teams in the No. 10 range in an attempt to snare another high pick. Club officials were willing to deal a 2009 first-round choice and 2008 second-rounder to make the move, but a willing partner couldn't be found. Still, the turn of events highlights how aggressive the Saints have been this year and why - following last week's acquisition of Giants tight end Jeremy Shockey for 2009 second- and fifth-round picks - they must be considered one of the NFC's top contenders. The Saints aren't just marching. They're marching with a purpose.

After the reports yesterday about the Saints making an offer to Lamont Jordan, ESPN now says that never happened.

New Orleans general manager Mickey Loomis said Sunday morning the team did not make an offer to running back LaMont Jordan before he signed with New England. The Saints did invite Jordan in for a visit.

Another video from Teddy Kider and Billy Turner of the Times-Pic. It's old and from yesterday but it was just posted today. They also incorrectly refer to DeMario Pressley as DeMarcus Pressley.

The Shreveport Times has a piece on the Saints acquisition of Jeremy Shockey and the fact that it is a high risk/high reward type of situation.

In Shockey’s case, the potential for trouble may come more from inside the locker room than out on the streets.

Shockey’s reputation has been that of a malcontent. He has criticized coaches publicly in the past. And he reportedly got into a shouting match with New York Giants general manager Jerry Reese last month.

“The people that know me as a person like Jon (Vilma) and several other guys on this team that I know, they’ll tell you that I’m not as wild and rebellious as some people say, but that’s the media,’’ Shockey said last week following a workout in Jackson, Miss. “They build you up to knock you down and if you know me, you know me. If not, the rumors fly.’’

The Saints are banking on Shockey’s relationship with New Orleans coach Sean Payton to be what keeps Shockey from repeating some of the mistakes he made with the Giants.

“I think he’s always been a good teammate,’’ Payton said. “You’d have to ask his former teammates, but in the time I spent with him in New York he was always a guy that worked extremely hard and this game is real important to him.’’

“He does have an injury history but when he plays, he’s one of the top players at this position in the league,’’ said NFL analyst Adam Caplan from Scout.com and Sirius NFL Radio. “He’ll also give New Orleans a badly needed second passing option — something they haven’t had since Sean Payton took over as head coach.’’

I can't take another article about Deuce and his knee(s)! Here is what the Shreveport Times had to add to the mix.

"Unfortunately I know what an ACL feels like if it's going," McAllister said. "But probably the biggest concern was just the swelling because throughout the whole process I had had a lot of swelling.

"So, that's really why we were precautionary with the MRI this morning — just to find out what, exactly, what it was. Everything came back fine. We just flip-flopped the practices from usually in the morning to this afternoon."

"I was able to finish practice (Friday morning)," he said. "I knew it couldn't be anything too serious because anytime that ACL goes, you're not going to be able to finish (practice)."

"The doc told me to be careful," he said. "I got it warm. But just going out there, I just wanted to compete with the guys. We tried to keep it as warm as possible. We switched the kind of braces that I normally would wear and I just tried to go make plays."

"I always at least want to get one (practice) in a day," he said. "If it's just too stiff or too sore in the morning when I normally would practice, then we'll try to get warm enough for that afternoon practice.

"And if I can't go one day, then it's really not a big deal now. Later as the season gets closer, then we may have some worries, but I just want to go out and contribute with these guys."

Jim Henderson at WWLTV says the Sedrick Ellis deal could get done in the next 24 hours.