The New Orleans Saints love a good bargain, so they couldn't pass up a two for one deal in the injury aisle when Devery Henderson and Tracy Porter both injured their hamstrings on the same play. Add that to a couple of other rookie injuries and you've got the ingredients for a fairly awful day at training camp. 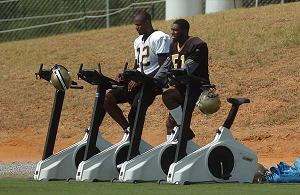 This is becoming a familiar scene. (Photo Source)

Here is the rundown of yesterday's injuries:

If Devery misses a substantial amount of time, it could certainly hurt his chances of making the team. Porters injury is supposedly a little more serious, and having him miss time at this crucial point would not be good at all for a rookie like him. They are both considered day to day. Hopefully this doesn't become a trend or theme in training camp. There are already a number of questions with injured players such as Deuce, Vilma and McKenzie whose answers will greatly effect the success of this team. Excessive injuries are a sure way to cause this talented and promising team to under perform yet another season in typical Saints fashion. Point all of your positive mojo in the direction of Jackson for the next couple of weeks.

I thought for sure Ellis would have signed yesterday, maybe even making the afternoon session, but I guess I have to eat my words. I would be really shocked if the deal doesn't get done today. Everyone is saying it's imminent. There will be a lot of spittle in Coach Payton's mouth with Sedrick Ellis' name all over it if Big Sed doesn't start getting reps soon.

What's going on with Roman Harper? I haven't heard anything about him, and I haven't heard too much about Kaesviharn either. Josh Bullocks' return to the practice field seems to be the only mention of any of the safeties.

Here is the rest of the action:

Transcript of interview with Jahri Evans from the New Orleans Saints official website.

Your daily dose of Jim Henderson in video format from WWLTV.com

NFL.com had a video of some training camp action set to the musical stylings of a Coach Payton press conference.

Here are Teddy Kider and Mike Triplett from the Times-Pic doing their Day 4 video recap.

The Times-Pic had a recap of the afternoons events. Here is the best part.

--Advice for Saints officials: They might want to add a port-o-let to the lower practice field. Two pllayers had to relieve themselves in the open the far east corner of the field. Aaron Glenn had to relieve himself under a tree. Andy Alleman found a spot under the support pole of the scoreboard of the nearby softball field. Both players at least had the sense to turn their backs to the crowd of about 800 fans on the opposite berm

The Advocate has a cool article about Will Smith. We haven't heard or talked much about him since training camp has started.

"I guess you could say I’m quiet," Smith said Saturday after a hot, steamy training camp practice at Millsaps College. "I just want to stay myself. I’m not a flashy guy. I’m not a flamboyant guy. There’s nothing big about me. I just stay quiet and do my job."

"I have high expectations of myself," he said. "I want to be the best guy every time I step on the field. The contract thing doesn’t have anything to do with it, that’s the business part of the game.

"I just strive to be one of the best," Smith added. "I know that people have high expectations of me, but not as high as I have for myself.

"We just didn’t get enough pressure on the quarterback last year," Smith said. "We got pressure, but we didn’t get the sacks when we needed to get the sacks. It seemed like we were a second too late a lot of times.

"I’m looking forward to getting more pressure and helping our cornerbacks and defensive backs," he said. "We have to play better than last year. We’ve got to be more successful if we want to make the playoffs this time."

Here is what Orgeron had to say about him.

“Will is very powerful, he has tremendous upper and lower body strength and quick feet,” said Orgeron. “He’s reliable and has all the characteristics coaches talk about. He’s also very knowledgeable, so I’m looking for a great year from him.”

Much focus has been placed on the receivers so far so it makes sense that the Times-Pic has an article about Robert Meachem, the "unofficial" rookie.

"Being a competitor, you always think you're going to play," Meachem said. "So last year, every week I thought I was going to be able to play. I had a little limp, and I didn't realize it because it got so natural. I got so used to it."

His friend David Patten had some nice things to say about Meachem.

"He's actually looking like the No.¤1 that we drafted him to be," said Patten, a mentor who probably is part of the reason for Meachem's early success this preseason. "He's explosive off of the line. In and out of his routes are night and day from last year."

"I'm that way with all of them, because I'm so much older than them," Patten said about the Saints' young receivers. "I've been through a lot of games. I've acquired some wisdom over my 12-year career. And the bottom line is they brought me in from a leadership perspective, to be a role model, teach the guys about work ethic, being a true professional, being held accountable.

"He wanted to work. He came to me and said, 'D, I want to work with you this offseason.' Because he felt like, for me to play 12 years, I've got to be doing something right. Coming into the league undrafted, coming from a small I-AA school, he felt like he could learn from me."

"The longer you stay out here and you play to meet your potential, eventually it's going to catch up with you and they're going to get rid of you," Patten said. "Bottom line, in this league, it's all about production. And I think from that standpoint, you have absolutely no control over the decisions they make. The only thing you control is what you do on the field. The only thing you control is how you help your fellow teammates."

"I see him playing just as well as everybody else," Johnson said. "He's doing a fantastic job. So right now, it's so early to start, to project anything right now. But I just see him in there and in there a lot, being physical, being fast, big. I mean, I really like what he's doing."

.WWLTV.com also had an article about Skyler Green, whether or not he can make this team and how he must go about doing it.

"I think so," he said. "I made a couple of plays where I’ve done a lot of things where I’ve shown the coaches I’ve been capable of being a of this football team and capable of making plays for this team."

"I look at (Carolina’s) Steve Smith and just try to be a more dominant guy, more physical and more quick at breaking away from the defensive back,"

Here is yet another article about Reggie's vow to improve this season and finally be the player everyone expects him to be. This time The Sporting News has the story.

"I definitely feel like I have something to prove this year, more so than the maybe the past two years, just because I didn't have a great season last year," Bush said after a recent practice at Saints training camp. "My first season was OK, but I'm ready to prove I'm one of those elite running backs year in and year out."

Of course they asking him about Jeremy Shockey.

"He helps out a lot, both in the passing game and the running game," Bush said. "You can always use a guy like Shockey, a guy who is going to perform and give you that edge."

You wouldn't believe it if I told you, but SaintsInsider.com has a similar story on Reggie Bush too! More quotes!

On participating in all activities with the team this offseason.

"He has helped me focus on the little things that are going to help me improve my game and I think that is the most important thing, to just try and better myself and to be one of the best running backs year in and year out, and being a thorough running back throughout all aspects of the game," Bush said.

"Deuce is a tough guy, one of the toughest guys I've ever been around, and he is obviously going to have an edge this year too after his knee surgery and the criticism that has been going around," Bush said.

Here is a video from Cox Sports TV on Jeremy Shockey.