Getting to Know: YOU!! - Patriotic Edition

Share All sharing options for: Getting to Know: YOU!! - Patriotic Edition 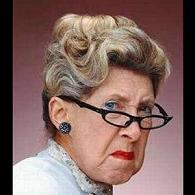 Mrs. Frumplesworth says "Be careful when handling fireworks this weekend!"

Sorry to those of you who were hoping to see the Saints MNF game against Tennessee as part of 2007: Redux (Just for you Hollywoo!). We now return to your regularly scheduled Friday afternoon post.

Have a great Fourth of July weekend!!