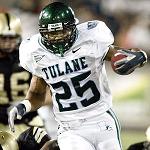 Forte tears it up for the Wave. (Photo Source)

The Times-Pic had a nice article on my man Matt Forte. The story discusses the fact that Forte has a good chance to become the number one running back on this team and make an immediate impact simply because he is really the only choice.

"I wasn't really paying too much attention to the situation. A lot of people say, 'Now, your role is more expanded since he's gone,' and all that stuff. But in my mind, it's really kind of the same. Coach Lovie (Smith) took me in, and he was like, 'Don't feel like you have a lot of pressure on you.' My mind-set, when I first got there, was I was going to go in and compete and try to get playing time anyway."

Here is what he had to say about the Cedric Benson situation.

"Of course (I feel sorry for him)," Forte said. "You don't want anything bad like that to happen to anybody, especially in the situation he's in. I think having him would have been a lot better for our team. You need at least two or three running backs in the NFL now -- everybody runs with two, or even three.

"I think he really would have helped us out, and it's a shame, because he's a really good guy. I spent a lot of time with him during (offseason training activities) when I was there, and it was just a shame to see what happened.

"You can't harp on it or stay stuck on it. You have to look forward, just like any other obstacle in life."

And here are some more quotes from Forte.

"It's a great task," he said. "I'm just happy to be in that situation. It's a big dream, and we always dream big. So just to be in these shoes right now is a blessing. I'm just ready to prove myself and hopefully, have a career where I can eventually be mentioned among those names.

"I think I've been placed in the perfect situation, with the history of the running backs for the Bears and also the city of Chicago, which is all about Bears football. So I don't think there's any better situation that I could have been in."

"That's just the way God made me," he said. "I'm very relaxed and calm in certain situations. I think that actually helps me in football, during the game, being calm and relaxed.

"I don't get nervous, and it helps me focus. A lot of the game is physical, but I think a lot more is mental ability. My ability to focus is what helps me." 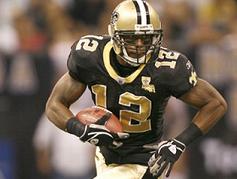 Colston should get paid!(Photo Source)

The Times-Pic also had another article, this one about the contract situations of Marques Colston and Jahri Evans. Their feelings on the situation...

Don't panic, though, Saints fans. I'll be shocked if they don't work out deals with both players at some point, this year or next.

It then goes on to say how valuable both players are, particularly Colston. Evans happens to be underrated because he plays a low profile position. Trying to gauge their value is difficult however, because they have not been in the league very long. Read the entire article for more of Mike Triplett's reasoning.

Check out this video of Reggie's Free Flo Do workout. They keep saying it looks hard but it doesn't look that hard to me. Not saying I could do it, but it looks kinda fun.

If you were wondering what Reggie did for his Fourth of July, we need only to check Kim Kardashian's official blog. The Bush and Kardashian families spent the day together at Reggie's house. There was much Rock Band to be played and even an American flag cake. By the end of the day, everyone wound up in the pool.

This doesn't really look safe and the risk for injury in this situation is high.