Ahhh...Monday morning after a long weekend. Everyone's favorite time of the week!! At least you have your New Orleans Saints to cheer you up. I hope everyone's holiday was splendid. I would love to hear what everyone did over the weekend if they are willing to share. Let's get started.

Here is an article from ESPN giving us a Saints camp preview. They examine the running came, our defense, the receivers and the offensive line. Here was their bottom line.

The defense should be better, giving this team a real shot at the NFC South crown. However, all the voodoo in the world isn't going to help the Saints go marching into the postseason if the running game doesn't get on track and stay there. If Reggie Bush has another underwhelming season, then there's not a chance this offense will be "keeping up" with anyone. 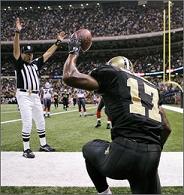 Had to put a picture of his only TD. (Photo Source)

Fox Sports has one question and subsequent answer for each NFL team and here is their Q & A for us.

Q: Is Robert Meachem a lost cause?

A: Nah. Though he reportedly showed up to camp 20 pounds overweight and promptly injured a knee in workouts last year, Meachem's been getting rave reviews from teammates and front-office brass this entire offseason. The former Tennessee star should be the third or fourth receiver come opening weekend in '08. 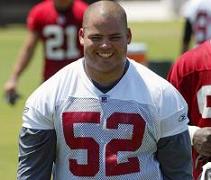 See you week one! (Photo Source)

For those of you Jeff Faine fans who were wondering how he was doing over in Tampa Bay, the Pewter Report has some information for you.

"It's definitely an adjustment. It's something I welcome," said Faine of his new duties. "I like being able to have some input in where the offense is going and some responsibility in how we do. I welcome it for sure, and I love being down here. I came down here not just because of the contract, but because I see this team has the potential to win something and actually go out and play for [a championship], so I'm excited to be apart of it."