“We’ve restructured our college scouting department and Brian is an experienced, smart talent evaluator who we targeted as someone who can help find the right players who will make our team better,” said Loomis. “He will work closely with Rick Reiprish in training and supervising our scouting staff.”

Yahoo! Sports had an article breaking down the Saints four big defensive acquisitions this offseason and asks whether this defense has improved enough. The answer?

The Saints did well with the types of defensive personnel they added. The moves bring them back to being favorites in the NFC South, and combined with their offense, there’s a good chance for a return to the NFC title game. 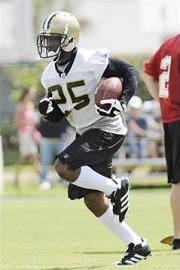 This has to be the year. (Michael C. Hebert)

Reggie Bush was one of Fox Sports' 10 players on the hot seat. Here is what they say.

Once hailed as the most electrifying prospect to come down the pike in years, the former USC Heisman Trophy winner sits at 22nd on Fox Fantasy magazine's list of running backs to draft. In two years as a pro, Bush has averaged a modest 3.7 yards per carry with his longest run from scrimmage listed as 22 yards. Legendary teammate Pierre Thomas averaged 4.8 in spot duty last season and mixed in a 24-yard scamper in only 52 rushing attempts. Oh, that's right — Reggie was being used as a decoy. 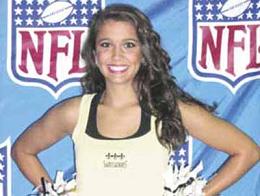 For all the fellas in the house, meet Bronwyn Burt, one of your new Saintsations!

Burt is the daughter of John and Sharen Burt of Fort Walton Beach. She graduated from Choctaw in 2005 after being on dance teams there and at Pryor Middle School.
"We're just thrilled to death," Sharen Burt said.

AOL Fanhouse has an early breakdown of Saints players as far as their fantasy football value is concerned. For those who will be participating in CSC's fantasy league, you may want to brush up. Here is my favorite part.

The Team DS/T
It kind of pains me to say this, but the Saints might be a sleeper defense this year. They added Jonathan Vilma and Randall Gay to a defense that stuffed the run but got thrashed through the air last year. Josh Bullocks and Roman Harper are improving, and while they aren't my first, second or third choice for a D/ST, I would consider a late round flier.

This ought to get everyone pumped about next season. Or really disappointed if you are the superstitious type. From Saints Gab.

Surprise! All four of the major NFL magazines, Athlon, Lindy’s, Pro-Football Weekly and Sporting News, picked the Saints to win the NFC South.

The New Orleans Saints official website announced that Drew Brees was invited by league commissioner Roger Goodell to go on a USO Trip, along with Osi Umenyiora.

And lucky for Drew and Osi, the Admiral invited other participants...

including two members of the Dallas Cowboys Cheerleaders.

Here is Mike Detillier's weekly piece on Houma Today. It analyzes which college conference has the most projected starters in the NFL this season. I will spare you the very long and detailed breakdown and hit you with the good stuff.

The Big Ten finished third with 105 starters and the Big 12 was fourth with 72 projected starters.

The Pac-10 finished with 70 starters, the Big East has 33 starters and Conference USA and the Mountain West each have 22 starters.

There are 57 players from the small college ranks that are projected starters in the NFL for 2008.

Here is an updated list of all the draft choices who are signed and unsigned by team from Scout.com.

This is a good one to end on. Read this article from the Times-Pic and tell us all which one you would choose, the gold pill or the black pill?