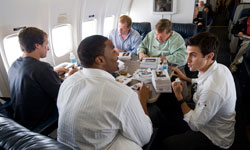 I think I see the back of Drew's head. (Photo Source)

“It makes me very proud to be able to experience a USO tour,” said Brees. “It is humbling experience, and one that leaves you with indelible memories. I know that the NFL has a proud history of great players that have been able to go on USO Tours and I take the endeavor seriously and hope to be able to impart to the people that we will come in contact with how much we appreciate their efforts and sacrifices.”

And this is pretty much the only mention of Drew in the NFL.com article. Guess they were more impressed with Osi.

All told, the commissioner, Osi and Drew made contact with 500 soldiers at this first stop.

Matt LeBlanc (not that one) had an article at Houma Today, asking the questions whose answers will inevitably determine the fate of the Saints 2008 season. Its the same old questions: Deuce and Reggie, the cornerbacks, Vilma, Mehlhaff, etc.

The question all Saints fans want to know is if the team will rebound from a disappointing 7-9 record last season.

To answer that question, the team will have to answer a handful of other questions.

Rotoworld released its offensive line rankings for the 2008 season. Here is where the Saints stood.

This line played above its head in '06 and returned to earth last season. It's really a middle-of-the-pack group, but still talented (LT Jammal Brown, G Jahri Evans) with developmental depth (T Jermon Bushrod, G Andy Alleman). Sean Payton throws more than anyone, even Mike Martz, which helps Drew Brees' numbers but can leave the linemen out to dry.

Not too great. I thought we would get a little more respect.

Yesterday, it was mentioned yet again that the Saints were possible suitors for a trade with Oakland to attain Lamont Jordan. This time it was ESPN.com.

Are you like me? Do you stay awake at night wondering what Archie Manning thinks about Brett Favre and the whole retirement controversy? Well now we can all get some sleep, because the Milwaukee Journal Sentinel has what we seek.

“I’m not saying Brett shouldn’t play some more,” Manning said. “I know Brett, but I don’t know everything going on with him. But early in my career, we went to play the Chargers one day and Johnny Unitas was in uniform, No. 19. It made me sad to see him in that uniform. Brett is physically better off than Johnny was at that stage of his career. But I personally don’t want to see Brett in another uniform.”

And what if Favre wants to play for the Packers?

“They’ve got a good team and good organization going there,” Manning said. “It does put them in a tough situation. So I hope it works out. I’m crazy about him and I want him to be happy.”

I just wanted to mention this too...

Manning, who will be among speakers at the annual meeting of Northwestern Mutual Life Insurance Co. financial representatives later this month in Milwaukee...

My god that man makes a ton of appearances! Do you think its like that movie Multiplicity where there are really like 3 Archie Mannings. One can go to Eli's game, the other, Peyton's all while the real Archie is giving a motivational speech at a deodorant sales convention.

Times-Pic Fantasy Football guru Ross Devonport is still looking for people to participate in a fantasy football mock draft this Thursday at 2pm. Get the info here.

Here is one I found. I really have no idea what its from, but its about the Saintsations and thats good enough for me. There are a lot of cuties in this one, but my fave is the one in the maroon sweatsuit. The best part comes at 4:15 in.