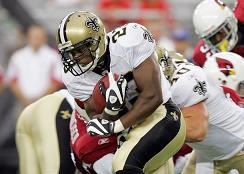 Put him out there with Reggie! (Associated Press)

What I Hope to See One thing I noticed in Thursday nights game was that Reggie started the game as the lone running back, pretty much picking up where he left off before his injury late last season. Though I think he looked pretty solid and improved enough to possibly carry the load by himself, I hope this is not the teams backup plan should Deuce have a setback. I think this offense really needs to return to the whole "Thunder and Lightning" dynamic; the combination of a between the tackles power back and a versatile back with speed and pass catching ability. We know Payton likes to get creative and having that dynamic opens up a lot of possibilities and keeps defenses on their toes. We can only assume that when Deuce finally returns they will both be out on the field at the same time and used creatively as they were in 2006, not sharing one spot and alternating carries. So while Deuce is out, why does the team change the offense and revert to Reggie being the single back when they have a fairly capable substitute for Deuce in Pierre Thomas? Even if he's not capable, isn't he worth a look after everything he's done? Pierre looked amazing against Chicago last year, and he is actually quite versatile himself. So why not put Pierre and Reggie out there together? Aren't Payton and the boys even remotely curious what could develop? What blunt object do we need to hit this teams coaching staff over the head with? This is pre-season so why not screw around with personnel combinations! What do we have to lose? I thought Payton was a creative guy. Pierre and Reggie, or Peggie if you will, could be the most wonderfully magical and deadly running combination in the league, sitting right in front of our face, and we would never even know because they never even tried. If we learned anything last season, isn't it the fact that we actually have fairly capable backup RB's and that Reggie needs to be used more creatively and not between the tackles?  The main point is this: Whether its Deuce, Pierre, or a combination of the two, I really think the team needs to stick with this two running back philosophy and I hope we see something like this in the upcoming pre-season games.

Adrian Arrington Bad news for AA, but how bad is it? Arrington is suffering from a grade two turf toe that Payton said was "significant" and would need at least a week of rehab. This is a crucial time during training camp for a player in Arrington's position and missing significant reps could hurt  his progress. Hopefully this really is only a one week rehab. If it is more significant than that, the IR list might be in Arrington's future. Though only a seventh round pick, he has shown too much talent and proven more valuable than his draft position would have you believe. Putting him on IR, though ending his season, would keep him in the fold and protect him from getting picked up by any other teams. When all is said and done, it might not be such an awful situation. He could still practice with the team, work on the weaker aspects of his game and become a better all around player, ready to go for 2009. Certainly wouldn't be surprising given the depth at the receiver position and the fact that some of the other receivers on the bubble are key special teams players. It's still a little early for this type of speculation and it all depends on how much time he misses and the how much time the team is willing to give him, but just thought I should throw it out there.

Jason David Returning Punts? I can't believe it myself, but if you were paying close attention to Sean Payton's press conference, you would have picked up on this little nugget...

Really? Jason David? I didn't know he was even being considered for that position. Maybe this is a last ditch effort for David to make this team or the teams last ditch effort not to cut him. I don't care who returns punts as long as they get the job done, so if Jason David needs to make the roster that way, so be it! This team definitely could use a threat in that department. 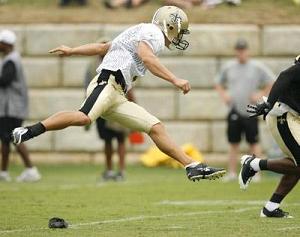 Mehlhaff Needs to Kick it up Rookie kicker Taylor Mehlhaff had a bad day at practice yesterday and continues to be inconsistent. He shanked a kickoff and missed a 53-yarder. This follows a shanked kickoff during Thursday nights game that was not done on purpose. After hearing his confidence early in training camp, are Mehlhaff's nerves finally getting to him? The scales seem to now be tipping slightly in Automatica's favor. I still think the team will only choose one of them to keep on the roster, but here is what Payton said about it.

That’s something that down the road will become one of the tough decisions we will have to make. Right now, it is a competition that is very close that you potentially weigh in. The challenge isn’t keeping two on the 53 (man roster). The challenge is keeping two active when you go from 53 to 46. That’s the trick, because now when you get to that 46, if you’re taking two kickers, which we’ve done before, now you’re taking one less tight end or one less cornerback. That’s the trick.

Not sure it makes too much sense to keep them both on the 53 man roster if you are only planning on activating one for each game. What would determine which kicker suits up on Sunday? The weather? I also think having two kickers wouldn't allow either of them to get into a rhythm. Seems to me you just pick one and stick with him.

Shockey has Arrived I was driving down Prytania Street this morning and saw my first person wearing a Shockey jersey. That was quick.

Brett the Jet I was watching one of my all time favorite shows Big Brother 10 last night. Hey, don't knock it until you've watched it! For those of you who don't know anything about the reality show, they lock a dozen or so people in a house with no contact with the outside world, voting out one person each week. It's basically like Survivor except instead of a remote island its a pimped out luxury compound. One of the competitions last night was called "In the News" where each player was given a recent news story and they had to determine whether it was a real news story or a phony one. Of course the first story was about the whole Brett Favre saga and the contestant fielding the question thought for sure this wasn't true, going so far as to say Favre would never play for any other team other then the Packers. The look of shock on all of the housemates faces when they found out it was actually true was priceless.