Texans @ Saints: What to Watch

Share All sharing options for: Texans @ Saints: What to Watch

It's time to put last weeks performance behind us and move on to our next challenge, the Houston Texans. Last years matchup against Houston still makes my blood boil when I think about it. If, for some reason, you ever get nostalgic and start missing Eric Johnson on our team, just watch that game and I promise you, sympathy is not one of the emotions you will feel. The picture becomes clearer with each game and with the return of Devery Henderson, Marques Colston and the one and only Deuce McAllister combined with Tracy Porter's first appearance, more answers will be revealed as we get ever closer to the season.

Below is what to keep your eye on during this weeks game and what the Saints need to do to improve on last weeks performance.

Running Backs Deuce is loose baby!! Coach Payton said himself that he expects D Mac to strap it up this weekend for the first time since that fated MNF game (you've never heard 70,000 people get so quiet so fast). How scary cool will it be to finally see Deuce take a hand off in an actual game situation. There is a good chance we will see a deluge of articles from the media this week about Deuce's return, so prepare yourself. Personally, I say they ought to put Deuce and Pierre out there with the first team just to see what would happen. Put Reggie out in the second half with all of the third stringers and let him go nuts. Now that would be interesting. It might actually look like his USC highlight footage. C'mon, it's pre-season, lets mix it up a bit. In all seriousness though, this is our first chance to get a glimpse of Deuce and maybe get a feel for what we can expect out of him this season. This team really needs to step up its running game this year or we are doomed to mediocrity and a dose of Deuce, healthy of course, would do wonders. Hopefully we see some big runs. Pierre will probably yet again over achieve, have a great game and still get no love in regards to first team reps. 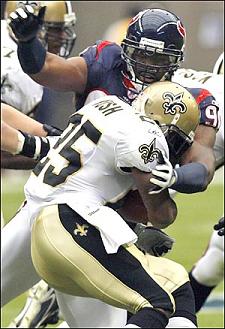 Bush has something to prove. (Photo Source)

Reggie Bush Why didn't I just include him in the running back paragraph above? One word: revenge. I don't care what Reggie says, he wants to show everyone that the Texans made a mistake by passing him up and that he is the real number one draft pick from 2006, even if it is just pre-season. He might only play a quarter or so, but he will no doubt be looking to show off his moves and prevent further articles, like this one, to be written. Nothing would make Saints fans happier then to see Reggie run right over Mario Williams and into the end zone.

Cornerbacks We didn't see much in game one from anyone and I think more questions were raised then were actually answered. Certainly nobody stepped up and wowed us. I'm not okay with the "Our defense just needs to be mediocre because our offense is so good" philosophy some people have. We need to be a little bit better than average. I certainly don't think average defenses win Super Bowls. It sure would be nice to see these guys not only break up passes but make big plays and force turnovers. Again, this is where I will be paying close attention. Tracy Porter will be making his debut after missing last week. He certainly has some ground to make up and nothing would help his cause more than a big game on Saturday night. Randall Gay needs to atone for getting caught in soft coverage last week. Usama Young keeps getting some good press but still hasn't seemed to take that next step. He's got a good chance to start but at some point he needs to come up big in an actual game and say, "I'm here, and I'm not going away. You will notice me."

Receivers Of course, everyone will be looking to see if Meachem can repeat last weeks performance and prove he ain't no flash in the pan. Unfortunately, that will be pretty tough. As long as he looks decent, I will be satisfied. This should continue to be the most interesting battle of the pre-season. There are a lot of players on the bubble and they will all be hungry. Devery Henderson will be good to go and he's got a lot of ground to make up. Terrance Copper, Lance Moore and Skyler Green all want to have big games. This position took a hit this week however when Adrian Arrington was diagnosed with turf toe. Just when it was getting good! One of the local news stations here reported that it was more serious then originally reported and the IR list might very well be in AA's near future. Saints fans should talk solace, however, in the fact that beloved Marques Colston will be participating in this weekends showdown.

Offensive Line Some better blocking than what we saw last week would be nice. Early reports from this weeks practices with the Texans seem to allude to the fact that Houston's D-line was looking much better than the Saints O-line and thats not surprising. Houston has a pretty darn good front four so I would say anything better than average from our linemen should be pretty promising. We all know an improved running game is pertinent for the Saints chances of success this season and would make a great complement to our awesome aerial attack and it all starts with the big guys up front. If the Saints get into a goal line situation like last week, make sure to watch for better results and a bigger push this time around.

The Return Game It would be sweet to see Jason David back returning a punt just out of pure curiosity. I will be the first to admit I'm a bit skeptical. It's entirely possibly this is a last ditch effort for the coaching staff to find a reason to keep JD on this roster and that his pass coverage just ain't cuttin' it. We should be seeing some Skyler Green back there as well. These punt returns are actually very important to the players trying to make this team and they will be very hungry so it will be exciting to watch.

Defensive Line Pressure!! Last week looked good so let's keep it up. Sedrick Ellis should build more confidence with each game so lets hope to see better play from him. Again, its all about seeing improvement from week to week and with a decent showing in the first game, the pressure is on. Pun intended. A sack or two would certainly be nice.

Quarterback Tyler Palko better not even think about bobbling a snap!

This is probably everything everyone will be discussing in the media leading up to the game. Feel free to add your own thoughts and observations.