Breaking It Down - The First Half

Share All sharing options for: Breaking It Down - The First Half

It's time to get down and dirty and analyze this game a little better. I watched the game on my Tivo and tried to pick up on things I missed while actually at the game. Here is what I saw in the first half. 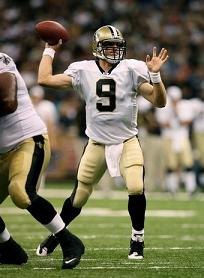 Review: Slow start for the offense. It all looked sloppy and the team didn't seem ready to play. This drive was pretty much 2 three and outs. Nice to see special teams recover the fumble. Payton always stresses turnover ratio and it always helps to be on the winning side of that stat.

Review: This is why I think this play by play recap is great, because I didn't even notice this at the game. Three straight passes and three straight drops that should have been catches. I don't even know what to say. I just can't believe we are still dealing with the same stupid problems as last year. After this game, I'm not even really sure we have made any improvements at all.

Review: Saints were 0/3 on third down while the Texans were 4/4 in the first quarter. Quite a contrast. The inability of the Saints to get off the field on third and longs is crucial. Twice on 3rd and 8 the Texans completed identical out routes against Jason David on the left side, keeping both drives, which inevitably lead to scores, alive. Replace him with a corner with better coverage skills who can make those plays and that is twice the Saints defense gets off the field quickly and keeps the Texans scoreless. Change those two plays and this entire game looks completely different. Schaub pretty much did whatever he wanted. Last week I was worried about the quick, short passes in between coverage and this week was more of the same. Yes, the secondary needs serious help, but I think it is drawing attention away from the dink and dunk stuff that is also killing us. I didn't realize Tracy Porter saw some time with the first team. He wasn't impressive. 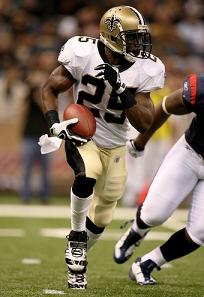 Man on a mission. (Getty Images)

Review: This is exactly how Reggie needs to be used. The play prior to his touchdown was a failed run attempt up the middle for a measly 2 yards. Forget that stuff for Reggie. Reggie can hurdle over guys and land cat like on his feet. Deuce, Pierre and even Stecker cannot. Deuce, Pierre and even Stecker can run it up the gut and carry a couple of people with them, somehow turning what looks like 2 yards into 6. Reggie cannot. Just play to their strengths. That goes for the entire team. Will someone please tell me I'm wrong?

Review: It's all about that Vilma play. Though the end result sucks, I think that says a lot about his talent. This was his first game back, so maybe after getting the rust off, those plays will have happier endings. 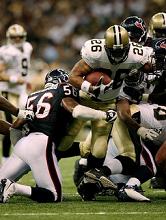 Review: Good stuff. I liked this drive. Because of the whole Deuce thing, this drive could very well have determined the fate of this teams running game.

I think we all feel the same way about the game, so I won't beat a dead horse (where the hell did that saying come from). We should all be upset with the defense after this showing, but I don't think it necessarily means the season is already in the trash. We should keep in mind that McKenzie still isn't back and that can make a huge difference. Also, both Randall Gay and Usama Young left the game early with injuries.

What do you guys think? What do you gather from all of this knowledge I am dropping on you? What are your feelings about this post?