Is Payton Serious about Devery?

Share All sharing options for: Is Payton Serious about Devery? 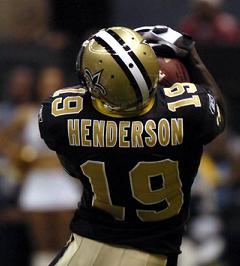 I am going to comment quickly on the whole Devery Henderson situation for a minute.

I think it would be safe to say that a good majority of the fans have been somewhat disappointed by the play of Devery Henderson, more so last year than in '06. I know we have all watched the games and heard about the goings on during the practice sessions and I think it is safe to say that most fans have him right on the bubble when it comes to making the team this year. Of course, on the other side of the coin, there are a few people who really love Devery and think this will be the year he proves a lot of people wrong.

I would have to say I agree with the opinion of the former group. I think Devery is on the bubble, and I also think there is a good chance he might not make this team. That's why its surprising to hear what Payton said about the situation concerning Devery, Robert Meachem and the receiving corp as a whole.

But asked if he wanted to see Meachem get more time playing with Drew Brees, Payton said: "Yeah, but that's got to be something that's earned. And right now, there are guys ahead of him, just from an overall efficiency level. And Robert's improved, and yet he's still got a ways to go." - Times-Pic

I know Meachem only had one good great game and he's still a young player who needs a little more experience, but the kid seems to be heading in the right direction. Devery did not have a great season last year, particularly with regards to dropped passes, and from what we have seen this season so far, it looks like those problems may not be far enough behind DH yet. He dropped a pass that went right off his hands in the last game against Houston and just yesterday in practice, didn't look so solid once more.

In the few plays we were allowed to watch of full team drills, Devery Henderson displayed the inconsistencies that have plagued him his whole career. Devery had one clear drop, then made a decent catch and then missed a ball where he was possibly interfered with but probably could have made the catch. - Fox 40

This of course has led many of us fans to shout, "Trade him!" Of course that doesn't really make much sense because if you don't want him, who would? Henderson was a free agent this off-season, tested the waters as far as offers from other teams are concerned, and came up empty.

So the question is this: Is Payton full of it when he says that Devery is up there with the first stringers and that its incumbent upon players like Meachem, Moore, Copper et al to knock him out of his spot? Is he trying to fool other teams and coaches into thinking that the Saints have no intention of cutting Devery, so if they want him, they are gonna have to pay? Does Payton really think Devery is a valuable addition to this team, or is he making a last ditch effort to get something for him before he cuts him and gets nothing?