Sleeping with the Enemy: Cincinnati Bengals

Share All sharing options for: Sleeping with the Enemy: Cincinnati Bengals 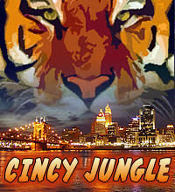 It's time once again to get better acquainted with our upcoming opponent for the week. This time around the Saints take on the Bengals, so I asked SB Nation's very own blogger, Josh Kirkendall of Cincy Jungle, some questions about the team and what to expect from them from this game and the entire season as well as who he likes better, Drew or Carson. Also, be sure to check out my answers to Josh's questions over at Cincy Jungle.

CSC: How have your draft picks been looking?

CJ: For the most part, they look like rookies. We drafted three wide receivers, and the impression they've left forced the team to sign Chris Henry, whom will be suspended the first four games this season. On the other hand, we drafted several defensive players that have made impacts. Keith Rivers, who missed several days of practice because of a holdout, has already stepped in and impressed everyone with his maturity and understanding of the defense. Our offensive rookies need time to develop while guys like Rivers, defensive tackle Pat Sims and safety (App. State god) Corey Lynch, have contributed highly to the optimism of an improved Bengals defense.

CSC: What are some other key acquisitions?

CJ: I made the point during training camp that one of our key pick ups this season isn't even a player. It's our defensive coordinator Mike Zimmer, who's integrating a more aggressive defense that utilizes the high-talent of our two cornerbacks, Johnathan Joseph and Leon Hall. Our most prized free agent, defensive end Antwan Odom has yet to take a snap after suffering an injury the first day of training camp.

CSC: Who left the team this offseason that might leave a hole?

CJ: Three major defensive players left this off-season, which includes the ridiculous over-payment for Madieu Williams and Justin Smith while team's leading tackler, Landon Johnson, left for the Panthers. It goes to show that not many people are worrying about what that loss will do for the team, considering they were leaders of a horrible defense. Offensively, we remained intact.

CSC: Which player are you guys most excited about?

CJ: Personally speaking, I'm really excited about Keith Rivers. He's the guy that could lay the foundation for being "the man" (the face of the defense, in other words). We're also as excited as Saints fans are about having a good pass-catching tight end.

CSC: What are fan expectations for the team this season?

CJ: Before watching our first team offense absolutely stink it up in the first two games this pre-season, I was convinced that the Bengals were a 10-win team. As we've fell from the optimistic airplane without a parachute, I think the general consensus is that the defense is going to stink, the offense is going be worse and special teams will be disastrous. Generally speaking, fans are looking in between 5-7 wins this season, with eight being a relief. Sad, I know.

CSC: What positional battles are raging on the Bengals? What are you guys going to be focusing on during this game? What should Saints fans watch for in the Bengals?

CJ: Most starting positions are set. An interesting battle, however, is taking place on the offensive line. What our offensive line coach terms the "Jurassic Line", Bobbie Williams moved to center, with Andrew Whitworth and Stacy Andrews at guard, and Levi Jones and Willie Anderson at tackle. It would be an understatement to say those five are a Fat Burger away from a ton. However, this is not the starting lineup – Williams will start at right guard, with Eric Ghiaciuc at center, Andrews at tackle and Willie Anderson on the bench.The more notable battle is a battle at wide receiver. Since Chris Henry was released, the Bengals needed a number three receiver to enable single-man coverage on Chad Johnson and T.J. Houshmandzadeh. That battle just hasn't worked out and Mike Brown figures that Chris Henry, with a four-game suspension to start the season, is the answer.

CSC: Who won't be playing tonight?

CJ: Chad Johnson, T.J. Houshmandzadeh and Rudi Johnson are the high-profile players expected to be out. Others include Andre Caldwell, Pat Sims and Antwan Odom, among several others that may not even make the team.

CSC: The Bengals are sometimes compared to the Saints because they both have high powered offenses and severely lacking defense. We know all about our problems here in New Orleans, so maybe you can make us feel better by telling us about your issues?

CJ: Well, we are the Bengals – that should make any fan relieved. Plus we're in the AFC. As long as the Patriots, Steelers, Chargers, Jaguars and Colts play at their customary high-level, the Bengals are routinely in a tough position to do anything worthwhile for the post-season.


CSC: Chris Henry is back, after he wanted to play for New Orleans. Chad Johnson is injured. What are you expecting from your receiving corp this year?

CJ: This is a loaded response. I made the prediction back in April that the Bengals will be offered a trade that they couldn't refuse for Chad Johnson. The Redskins offered a 2008 first-round pick and a 2009 third-round conditional pick. When the Bengals passed on that, it was clear they weren't going to let Chad go. As the off-season wore on, Chad's rhetoric wore down, and by the time mini-camps were in session, Chad was basically onboard. T.J. Houshmandzadeh is playing in the final season of his contract and Chris Henry is, well, Chris Henry. Long story short, I expected (and perhaps I still should), that the Bengals wide receivers would see a radical turnover from this season to the next. In response to that expectation, the Bengals drafted three wide receivers in the draft, worked hard at getting Marcus Maxwell ready -- a rising receiver that reminds me a lot of T.J. Houshmandzadeh's skill level.

In truth, for this season, if injury isn't a factor, I don't expect Chad Johnson and T.J. to replicate last season – 205 combined receptions, 2,583 combined receiving yards and 20 touchdowns. Now that Chris Perry is back to full strength for the first time since 2005, and Ben Utecht signing with the team, our starting receiver duo should see a drop in their production.

CSC: Being as unbiased as you can possibly be, who do you think is really better? Palmer or Brees?

CJ: Mechanically speaking, Carson Palmer is often referred to as the man with the best technique. There's no doubt about it, he's great. I think where Drew Brees rises above Palmer, from what I've heard, is a leadership quality. That's not to say that Palmer isn't a leader, but I think where the Bengals severely lack is that guy in the locker room that players respect and listen to. For example, it wasn't Carson Palmer that convinced Chad Johnson that he's blessed and should give up his off-season campaign to get out of Cincinnati. It was Ray Lewis, of all people.

CSC: It's always good to get an outside perspective. Care to share your thoughts/feelings/expectations about the Saints?

CJ: I actually like watching the Saints. They do remind me of the Bengals in that they are exciting because at any moment, a high-scoring contest can break out. Where I beg the football gods for a defensive team in the Bengals, high-scoring offensive games are always the most exciting. The Saints have that potential, it seems, each week.

CSC: The third pre-season game is usually the closest to a regular season game because the starters will play around three full quarters. Wanna make a prediction?

CJ: I'll bet that the Saints offense scores a big-play touchdown that the Bengals offense will be really stale out of the gates, and that the first-half score will probably favor the Saints; maybe even by two scores.

Don't forget about the open game thread tonight. Kickoff is at 6:30 and I will open up the thread at 6. I will be there early if any of you want to chat before the game and I will be there all game to watch along with you. It's Saturday night. Don't act like you have something better to do, so I expect to see your butt there. Be there!