Breaking It Down: Saints @ Bengals - The First Half

Share All sharing options for: Breaking It Down: Saints @ Bengals - The First Half

We've got a lot to get to this morning so let's not waste any time. Below is the first half play by play analysis for your digestion. 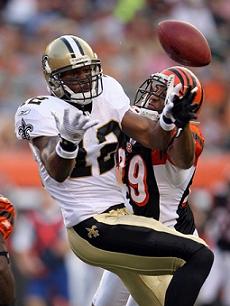 I believe he dropped this one.(Getty Images)

Review: For the most part the offense looks sharp. This could have easily been 7 points instead of 3. Drew will certainly work out those kinks with his receivers by week one. Colston looks very uncharacteristic with two drops that are normally sure catches for him. It's going to be a long season if Colston starts imitating Devery and comes down with his very own case of the drops. Personally, I wish the Saints wouldn't put Colston in dangerous situations, like going over the middle, during meaningless pre-season games.

Review: Hopefully, in the near future, we will all look back on this one drive and say, "That was the drive that turned it all around." The two positive aspects were the excellent play of rookie Tracy Porter and the healthy return of Mike McKenzie. This unit had not one but two chances to force a turnover. Thank you sir, may I have another. 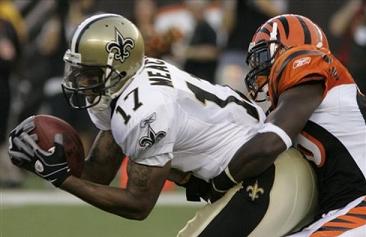 Review: Saints are just making it look easy. This offense continues to be a well oiled machine. Meachem has the play of the drive with his 54 yard catch. This is a great sign that he is for real and that first pre-season game was not just random luck. Ghent probably won't even make the team so with the eventual addition of Shockey, this team should be even more potent in the red zone.

Review: Another pretty solid looking drive for the defense. Kendrick Clancy was all over the field on this one. He's made this team, no doubt, and he is also a huge help in stopping the run game. Some pretty good play from our linebackers as well. Fujita and Shanle both stepped it up. One of the more important things to note is who I am not talking about, and that is our secondary. Nobody getting burned or caught out of position and on the one complete pass this drive, Shanle was the man in coverage. Much of that improvement is due to good pressure by the front seven. It certainly helps the guys behind them.

Review: This was where the offense started to look poor. Deuce, Reggie and Stecker both had little to work with as the O-line just can't seem to open up holes for them like other teams do. If this continues, it may not matter who the running back is as victory will have to come through the air. I hope Drew's arm can handle it one more year. Right now, Stecker is the most impressive back on the field and he looks so darn quick.

Review: Some good and some bad on this drive. Once again, the dink and dunk short stuff hurt us in the beginning and their fast receivers were able to take advantage of our not so fast linebackers. Those are the plays that are gaining significant yardage and doing the most damage. Hopefully, opposing coaches do not read this blog. I think it is safe to assume they don't. The defense picks it up however with some good pressure and the Bengals are stalled yet again. This defense is looking fairly impressive.

Review: Another stalled drive for the Saints high powered offense. The Bengals stepped up their defensive play on this series and looked pretty good applying pressure. Saints fans got a good look at Keith Rivers who could have very well been the Saints first round draft pick this year and he looks pretty darn good.

Review:  Three and out. Can't beat that. Clancy looked good. McKenzie looked good. Shanle looked good. Period. Still really worried about the short yardage passing over the top and the YAC, but if our linebackers can close in like Shanle did, then we should be okay.

Review: This is the third drive in a row that the Saints offense has not looked up to snuff. The running game is still non-existent, Henderson is doing his usual ball dropping and I don't know what was going on with Brees and Patten but they just couldn't seem to get on the same page. The only consistent person on these last couple of drives has been Lance Moore.

Review: Shanle looks hungry in this game. Twice this drive he was in the backfield quickly, forcing the quick pass and nearly coming away with sacks. Aaron Glenn also looked reliable again. I do hate to see those 3rd and longs get converted, especially when it's our secondary to blame, but they were very few and far between in this half so it's fair to say there is definite improvement. More short underneath passes that turn into significant yardage. Not the best series for the defense but they again manage to force the punt. 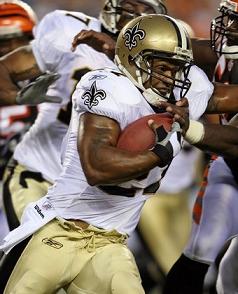 Review: Well this drive wasn't great at all. Stecker, however, looks so darn good. Again, he is so quick and his feet are always churning. It does look like he has some larger holes to run through than Deuce and Reggie before him, but not by much. Stecker's talent and hard running style are probably equally the reason he is breaking off bigger chunks of yardage.

Review: If you have a tight end playing against the Saints this season in fantasy football, make sure he starts. Tight ends have looked pretty good against our defense these last two games. On the positive side, I don't know whether the Saints defensive players just played harder or Gibbs decided to get a little more exotic with the blitzing schemes, but the pressure tonight was vastly improved and it was from all angles.

That does it for the first half. All in all, as stated earlier, I think we have to be happy with this performance. There were some bad plays on both sides of the ball, but that is to be expected every single game. The larger picture is what's important and on Saturday night, the larger picture was a much improved defense. There was a little bending but absolutely no breaking.

Let's hear what you guys think!