Pierre Thomas Gets "No Respect"

Share All sharing options for: Pierre Thomas Gets "No Respect" 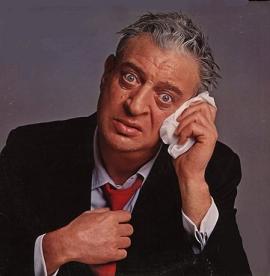 "Oh, I tell ya', I get no respect. My wife asked me how I felt about the Saints this season. I told her I'm a big Gay fan and I would take Pierre Thomas over Bush any day. She told me, 'All these years, I should've listened to your mother.'"

Let me preface this entire post by saying I am happy to even be having this argument. This is a good problem for a football team to have.

One of the huge question marks going into this season (it's so close now!) is the Saints running game, more specifically, which players should play, how much they should play and in what manner should they be used.

There are a lot of people out there in Who Dat Nation who think PT Bruiser should become the teams new feature back. These people often point to his week 17 performance last season against Chicago. Or his impressive pre-season performances last year and now this year. These people find themselves asking what more does Pierre have to do. How can he prove himself anymore? The other side of the argument presents the fact that he's never played in a meaningful game and that all of his stats may be somewhat "inflated."  Like the famed comedian Rodney Dangerfield, poor Pierre Thomas just can't get any respect.

Right here in one of very own CSC FanPosts, we have two readers (hi guys) playing out your incredibly stereotypical PT argument that Saints fans around the globe have every single day. Their names have been changed to protect their identities.

Jim: That’s an average of 8.2 yards per carry against the Chiefs

Bob: The Chefs’ (sic) defense is much worse than the Saints’. Bad. Nothing to brag about here, let’s move on.

Bob: … and the Saints STILL LOST THE GAME. Weren’t those a lot of junk yards he got, after the game was essentially decided and the Bears put the second string in, to save their starters for the playoffs? Which brings us to…

Jim: This year, he hit 9.2 against Cincinnati. He’s proven, every time he’s been given a chance, that he is a legit, starter-quality NFL rusher.

Bob: The Bengals’ D sucks!!! It’s a preseason game!!! It means nothing!!! I once saw a back named Brown (I think) who really tore it up for the Chiefs in a preaseason game, and I mean he ran over and around everybody. I thought Man, this kid is good. He was 4th string or something and they’ve since cut him. Preseason!! Means nothing!!!

For the record, I agree with Jim, but both sides bring up totally valid points and I can see where they each are coming from. At this point we are stuck in some metaphysical football world where not enough evidence yet exists to either prove or disprove the theory. Like the existence of God.

We're looking at this the wrong way. I propose we take a step back, look at it from another angle and re-approach the issue. Because all of Pierre's performances have all come in games with questionable meaning, his fairly impressive accomplishments to date are all suspect. Instead of using those stats and asking what more does Pierre have to do the real question we need to be asking is this: What has Pierre Thomas done to not deserve more touches?

Tell me what you have seen in Pierre Thomas' game that makes you think he can't play at a high level in the NFL. I am putting the onus on you. Thomas is innocent until proven guilty. It's up to you to give me a reason why he shouldn't be out on the field. Prove to me beyond a reasonable doubt that Pierre Thomas is not ready for this league. Those fans who are in favor of Pierre Thomas at least have stats on their side. Opponents have nothing but naysay. The only argument made against Thomas is that his amazing numbers thus far maybe aren't really that amazing. They're an illusion and they're not a valid measure. That's not an argument, that's just merely saying my argument is wrong. Just consider his impressive pre-season and week 17 stats as an extra bonus.

So what is his game lacking? Lay some numbers on me. Does he have a fumbling problem? Nope. His fumble against Cincinnati last week was, guess what, his first one in the league. See for yourself.  Not a good blocker? Pierre Thomas single handedly kept first round draft pick Keith Rivers off Mark Brunell in last weeks game. He hasn't had a good game every time out? Nobody is perfect. He's young and inexperienced? There is no better way to accelerate the learning curve then by putting him out there in real game situations. Let's go back to those "inflated" stats he's put up in pre-season and week 17. If those numbers don't qualify as impressive to you, then what would? Should he have run and caught for over 200 yards each instead of only 100+ against Chicago? Would 20 yards per carry instead of 9.2 against Cincinnati last week be enough for you to change your mind? You might feel that Pierre should just ride the bench and soak up everything he can learn until he's needed. I don't agree with that. We're only getting older my friend. A football players career is a ticking clock with a limited shelf life, particularly a running backs. Even if seeing minimum action early in his career means he will be able to prolong it, Pierre is still wearing down his body at least slightly, even if its not in games. Every year he is under utilized equals less production the Saints will get out of him when they actually want it.

The reality of the situation is he won't start. He is behind two well qualified, big name players in Deuce McAllister and Reggie Bush who, and here is the important part, make a lot more money than Pierre. Had Pierre been a first or second round pick and played the way he has been, he most certainly would be given more regular season playing time. Though I don't consider Thomas a replacement for Reggie as much as I do for Deuce, we paid Bush millions of dollars before he ever stepped a foot on the football field. Because of that, here we are waiting to see if Reggie will step up his game while Pierre Thomas is actually doing it. It's like being stranded in the desert trying to get water from a rock when there's an Oasis right over the next dune. I get that and I have accepted it. We all should. It may not be completely fair but that's the way it is. If Deuce's health turns out to be a much larger concern or if he just doesn't have that spark anymore, and of course I would never wish that upon him, I truly hope that Sean Payton has the gumption to know when to throw in the towel and usher in the next generation of Saints football. From all the trades, acquisitions and sound bites we have seen and heard from this team and its front office so far this offseason and pre-season, it appears they are making one big push, taking a serious stab at getting to Tampa in February, and doing whatever it takes to make it happen. Vilma. Shockey. Ellis. Gay. All are examples of a franchise ready to make a move. The running game should be treated no differently. There is one more guy waiting to add his name to that list. Thomas.