Here are some initial observations after having watched the game twice (Tivo is a bloggers best friend). All discussion, agreement and disagreement is welcome. 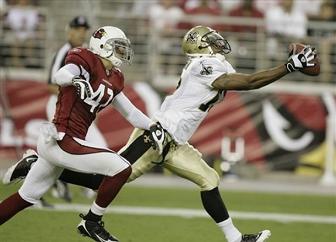 This was the play of the game. (Associate Press)

Wide Receiver Battle Heats Up This will no doubt be what everyone is talking about today. David Patten should feel like a proud pop after Meachem's performance last night. We know the veteran receiver has been Meachem's biggest supporter and last night all their workouts together paid off. Meachem was just plain nasty! The first catch, an over the shoulder grab on an overthrown ball showed us just how much talent he has. The touchdown grab in the fourth quarter displayed his YAC ability after a spin move and a stiff arm helped him gain another 54 yards after the catch.

Meachem's performance last night was promising to say the least. It's his second year so that rookie buzz doesn't surround him anymore but it would be fair to view him as just that, a rookie. Saints fans should count their blessings because not very often do we have the pleasure of seeing two first round draft picks make their NFL debuts in one season. We should expect a lot out of this kid. Coming off a season when the Saints had the  number one offense in the league, Payton <em>still</em> used a first round pick on Meachem, so you better damn well believe he had a reason. That being said, we need to remember that this was just one game and pre-season games should never be used as accurate measuring tools. Meachem faced some pretty weak tackling.

Adrian Arrington also stepped it up last night and showed us why we have been talking about him the last two weeks of training camp. One of his two catches was nice as he came back to the ball and got his body in front of the defender.

That being said, the wide receiver battle has gotten more interesting. Meachem and Arrington both having good games means Copper, Moore, Henderson, Green and Blythe are in trouble.

Pass Rush The pass rush looked much improved. We seemed to be a step quicker and got much more pressure and penetration. Nothing amazing from Sedrick Ellis but I think he will be fine. One thing I am worried about, however, with our new pass rush that I noticed last night. Sending everyone over the line is risky. When you get good penetration in the backfield, you really have to get to the quarterback quickly otherwise the space behind those defensive linemen opens up. If a quarterback can get a short pass off quick enough, they can exploit this gap, dink and dunk, and allow the receiver to pick up lots of extra yardage after the catch. This was the case on several big plays early in the game last night.