Share All sharing options for: Saints Leave Room for Improvement

"There are some things that bothered me and that we need to get corrected, but we still have a lot of training camp left to get them polished up and continue to improve. It was a good first step and I was pleased with the effort from our players." 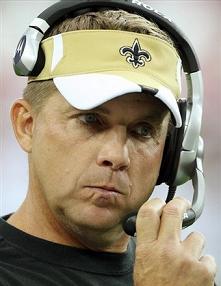 Those were the words of Sean Payton following Thursday nights showdown in the desert. While it was great to see the boys get a win and finally take a peek at what the rest of the season might have in store for us, this was just preseason. While we can only speculate on what Payton feels the Saints need to improve on, we can be sure he is nowhere near satisfied. Let's take a look at some of the things he might have been referring to in his aforementioned quote and what we might see get emphasized this week in practice.

The Offensive Line This one is somewhat of a surprise to me. There were definitely issues heading into the season, specifically Jonathan Goodwin's ability to fill in for departed Jeff Faine, but the rest of the line has remained intact. I am mainly referring to the first team players here and even within that I am really referring to our run blocking. The pass blocking looked better than average as it has for the last couple of years, but poor run blocking like last night will inevitably spell doom for our running game no matter who is carrying the ball. I certainly don't think it would be fair to constantly berate Reggie Bush's under performance as entirely his fault. In fact I think Reggie's fairly solid performance last night was pretty impressive given what he had to work with. For those Reggie haters out there, ease up on the guy. Hopefully we see bigger holes open up in the near future. The backup lineman made their fair share of mistakes as well, including botched snaps, missed assignments and an inability to clear the way for Pierre to get into the endzone on the goal line during one drive.

The Linebackers If we are going to have a Grade A pass rush, then the LB's are going to have to pull their own weight and step it up as well. They will need to get better acquainted with the luxury of not having opponents offensive linemen right in their face and so much open space to cover, something they probably aren't used to in years past. A team with a decent quarterback and a strong tight end or versatile back could exploit that gap, dink and dunk on underneath routes all day, and gain significant yardage after the catch (the good news is that would mean the deep receivers are actually covered). Man, if we only had a versatile side-to-side MLB who could cover a lot of ground. Someone, oh, say like, Jonathan Vilma! I don't think it would be fair to completely judge this position group yet with Vilma having never played a down. His eventual presence on the field could completely turn this frown upside down.

The Secondary To be honest, the frustration here comes simply from Randall Gay being caught out of position on a 23-yard pass on third down. I will not be able to take another promising offseason cornerback acquisition turn sour and disappointing. Though I think a lot of people will be quick to pick apart the secondary, honestly, it seemed much improved despite the absence Mike McKenzie and Tracy Porter. Other than Gay's screw up, there were no defensive backs actually getting beat deep. As mentioned earlier, underneath routes in open space with nice runs after the catch were more the culprit on the big yardage passes. Jason David even managed to stay out of serious trouble.  All in all, these guys could also be included on a list of positives. At the bottom.

Penalites If I know the kind of man Payton is, and I think I've got a good idea, I imagine that Reggie's two runs for big gain in the first quarter that were eventually called back due to penalty frustrated Payton to no end. This should get filed under "minor problems" but still something to be aware. Stupid penalties can be drive killers on offense and drive sustainer's on defense.

All is not lost Who Dats. The good news is that it is still very early. Definitely no need to panic whatsoever but we should at least be honest with ourselves, acknowledge our errors and work to improve them while we still can. For every negative, there is a positive and tomorrow we will discuss all that went right with Thursday nights game. Hint: It will include a guy whose last name rhymes with smeachem.

Feel free to agree or disagree with any of these points or add your own insight by elaborating.

In a somewhat unrelated note I wanted to thank all those who took part in the gameday open thread. That was my first open thread with CSC and I think the turnout was pretty good considering, though I know we can do even better. Here is a roll call of all who participated. I won't include myself, which means satchmo26 is the big winner for participation.