Saints Still Have Some Mistakes to Fix

Share All sharing options for: Saints Still Have Some Mistakes to Fix 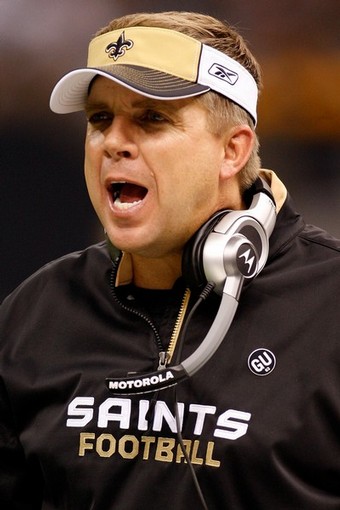 Payton has his work cut out for him. (Getty Images)

Now that we've all come down from the high of a season opening win it's time to get back to reality and swallow a big dose of reality. Sunday's game against the Bucs was not perfect. It was just good enough. I will take a 24-20 victory every week, but as a perfectionist, I really want to see the Saints just dominate the way New England did so many times early last year. Whether you love them or hate them, I think the 2007 Patriots were a great team from top to bottom and should be regarded as a near perfect model for success. 16-0 should be the goal at the beginning of every season for every team. Improbable? Of course, but these guys shouldn't even be playing the game if they aren't giving it everything they've got. That being said, the Saints won't even come close to an undefeated season playing like they did last Sunday. So let's take a look at some of the mistakes the Saints made Sunday against the Bucs that need to be fixed before next Sunday's battle in our nation's capital.

Penalties The first quarter of Sunday's game was sloppy. A delay of game penalty and two back to back false start penalties are just a result of miscommunication. Those kinks ought to be worked out very quickly. In fact, with no other penalties like that in the second half, they may already have. It's week one and issues like this are to be expected.

Tackling This is another quick fix that should resolve itself naturally. It's normal for the team to look a little sloppy in this area during the first week. The players need to get acclimated to the speed of the regular season. Even during pre-season games, though it's full contact, they're not out there trying to kill each other. Now they're looking for blood. If this continues through say, November, then we've got a problem on our hands. Like the penalties, I don't think this should be much of an issue going forward.

Drew Brees Drew has been a huge disappointment so far and he really needs to step it up quickly. Kidding. Just making sure you're paying attention.

Run Defense Some of the problem here lies in the aforementioned weak tackling department as it allowed for Tampa's running backs to gain extra yardage when they probably shouldn't have. With all of the Saints emphasis on the pass rush, the run defense may have been slightly overlooked. Kendrick Clancy and Sedrick Ellis each only had one tackle apiece. Hollis Thomas is now on IR so kiss his big butt goodbye for this year. Clancy and Ellis need to step it up while Brian Young needs to stay healthy, if that's possible. We may never see a 100% Brian Young. The team is probably looking at other defensive tackles as we speak. Where is Orien Harris?

Special Teams I know Reggie really wants to be the main guy in the punt return game but he's running out of time to impress us. He has not been the game changer, ala Devin Hester, that I'm sure he is hoping to be. On Sunday he misjudged a punt and allowed it to sail behind him. On other occassions it's obvious, with all of his dancing and prancing, he is trying to go for the big play every time but gets nowhere. I'm willing to give it more time but it would be very nice to have someone who is a danger every time he's back to return. What about Jason David? His name was getting thrown around during training camp in relation to the return game. Now that we've come to our senses and realized he shouldn't be used much in our secondary maybe returning punts is his calling.

Pass Blocking I might be nitpicking now. Normally this is a specialty of our offensive line and I don't expect to be talking about this in the near future but we need to make sure to keep Drew protected. The Bucs scored six points on Sunday because they got to him quickly.

Running Game I am not even sure if this is a problem or not. We still didn't see a consistent pounding up the middle like we get with a back like Deuce but that may not be our gameplan. Payton may have just accepted the personnel he has and decided that's not the way to get the most out of what we've got.

I am sure coach Payton is nodding his head in agreement right now as he reads this. The good news is that some of these problems should correct themselves quickly. It's also nice to note that I didn't mention our secondary or giving up big pass plays. What do you guys think? What other areas do the Saints still need some work? What did I get wrong?