Colston is Gone. Now What?

Share All sharing options for: Colston is Gone. Now What? 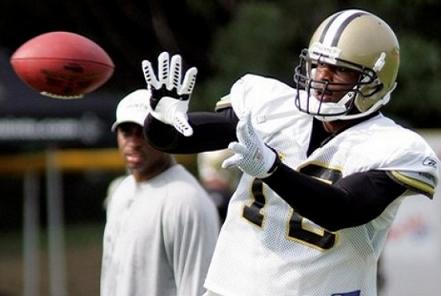 Marques Colston's thumb injury was the top story on NFL Live yesterday so I guess that means I have to write an in-depth post about it today. First of all, let's make sure we have all of our facts straight. Colston tore a ligament in his left thumb and had surgery on Tuesday. It is reported that he will be out four to six weeks though some say it will certainly be closer to six. We all saw his amazing catch this pre-season...does he even need two hands? Below we will take a look at Colston's stats and find out just what we might be missing out on these next six weeks or so. We'll also take a look at how Colston's absence might effect the rest of this team.

What are we missing? I have some pretty good news for you guys. I decided to check the stats on Colston and I found something interesting. Colston is a late season player who starts off slowly. Let's assume the worst case scenario and Colston is out the full six weeks. This means he is out from week two to week seven, returning in time for the International Series game against the Chargers in London on October 26th. I decided to check his performance during the first half of the season, namely his performances from weeks two through seven, and compare them to his performance the rest of the year. In the following stats, I added up his totals for the games within those weeks of the season and divided them by the number of games he played in. I used averages instead of totals since there are more games included in the later half of the season. These averages do not include games he did not play in. They are all from NFL.com.

*Does not include week 17 game when Saints rested key starters for playoffs.

Since Colston won't be back until pretty much the beginning of November, let's also compare his monthly totals. It's only fair to use 2007's stats because Marques played in every game last year but missed a few games during the 2006 season. Here we are using totals.

I think this provides adequate evidence that Colston takes a little while to get warmed up. Actually, when looking at each season's stats, he doesn't have a hundred yard game before at least week 8. So if we want to look at the incredibly bright side of this unfortunately sad situation, we can assume that this the best six week period to be without Marques Colston. If we want to be more pessimistic, we could assume that Colston will not immediately step it up upon his return and will now need the middle and later part of the season to warm up before really putting up big numbers.

Can he be replaced? It's pretty impossible to completely replace a player like Colston. We take for granted how easy Colston makes some of his catches look. He is on another level and there are very few players in his league. If any player on the Saints could do what Colston does so well it would definitely have to be Shockey. J. Shock is great at going over the middle and isn't affraid to take a hit or even give one himself. That's where Colston shines as well. Colston and Shockey are also both huge threats in the end zone. The loss of Colston could certainly mean more touches and looks to Shockey and we all know that will keep him happy. It will be tough for him though because without Colston, defenses will focus on him and him alone.

Robert Meachem...Come on down! With Colston out we should expect to see some receiving shuffling and more opportunities for other receivers. This surely means that we will finally see Meachem with a uniform on for the first time ever in the regular season. A little sad that it takes Colston's injury for our first round draft pick to finally even dress but that speaks to the talent and depth of this receiving corp so we should all be happy. I wouldn't, however, expect Meachem to just light it up and go for 200 yards. I also wouldn't expect him to be an equal replacement for Colston.  Payton has been fairly conservative with Meachem, seeming to purposely hold back, so I certainly don't think he would just go from first gear to fifth gear. Don't forget about Payton's feelings with regards to Meachem and Devery Henderson. After last week's game against the Bucs, Henderson has never looked better.

The rest of the receivers. The truth is, we know Drew Brees likes to spread the ball around and he will continue to do so. When it comes to the Saints receivers, the depth chart is thrown out the window. Everyone will probably have their equal chance to make a play and this doesn't neccesarily mean Patten will collect the windfall as the number two guy. This isn't a situation where everyone automatically moves up a peg. If we can expect any receiver to benefit from the absence of Colston, my money would be on Lance Moore. With more attention probably now being focused on Shockey as the next immediate threat, our other receivers will have more of a chance to make plays. I think Moore is the type of player who would take advantage of this type of situation. This may also mean more short stuff to Reggie as well.

Unfortunately, we will never really know what the Saints will miss over the next month or two with the absence of Marques Colston. As a team they need to move forward and make it work with what they have. With such a deeply talented receiving corp and hall of fame caliber quarterback, it shouldn't be a problem. In the vote taken yesterday, 96% percent of you believed that the Saints could get by without him in the short term. I certainly agree.