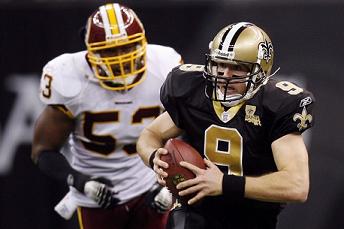 Hopefully, Drew won't have to do too much running(Getty Images)

Sunday's matchup between the New Orleans Saints and the Washington Redskins should be an interesting one. The Redskins are coming off a frustrating loss to the Giants last week while the Saints will attempt to keep the ball rolling with another win. These two teams last met in 2006 and saw Washington defeat New Orleans who had just come off an incredible win over the Dallas Cowboys. Let's take a look at what we might expect when we settle in to watch this weekend.

Saints Offense  vs. Redskins Defense We should see much more Reggie Bush. He looked pretty impressive last week and I think Payton will ride the wave of that momentum. After last weeks performance, I am hopeful that Payton has figured out the right way to use Reggie and we see a lot of screen passes, pitches, quick slants etc. Like last week, I expect more reception yards than rushing yards for Reggie. The Redskins know how explosive Reggie can be and they have gone on record as saying they will be looking to contain him. Deuce is also listed as Probably so there may be a chance that fans will get to see him for the first time in the regular season.

The Redskins have a very talented secondary with players including Shawn Springs, Carlos Rogers, Fred Smoot and LaRon Landry. These guys can all make big game changing plays particularly interceptions, if they can hold on to the ball. Last week they dropped a couple of sure interceptions that may have changed the entire outcome of their game and have been focusing on that all week. Drew Brees will have a tough challenge tomorrow for sure. Both he and the receivers need to make sure they are on the same page and not give this secondary any opportunities. The turnover ratio will be key in this game. Of course with Colston gone the door is wide open for the other receivers, particularly Robert Meachem who will be making his regular season debut this weekend. David Patten might be interested in making a statement to his old team this Sunday as well.

Newcomer Jason Taylor anchors the Skins defensive line but he has lost a step or two over the years and is admittedly not 100%. Andre Carter lines up at the other end and both will be looking to get after Drew Brees big time in an attempt to rattle and contain him. This also means the Saints offensive line needs to show that great pass blocking we have come to know the last couple of years. If Drew has a 300+ yard day and the Saints don't win, something went terribly wrong.

Starting linebacker Marcus Washington is questionable for the game but the talented London Fletcher will still be out there making his presence known. This group will have the wonderful responsibility of keeping tabs on the fiery Jeremy Shockey. Shockey will now have more responsibility with the absence of Colston and will be the Saints best bet to fill in for those tough over the middle throws. Skins linebacker Rocky McIntosh will be a big part of containing Shockey come Sunday. Keep an eye on that matchup.

If the Saints can grab an early lead and make the Redskins play catch-up, they will be forced to throw the ball and rely more on Jason Campbell. Campbell's play has always been shaky despite showing a lot of talent. It is most likely the result of having so many different coaches in such a short period of time and having to learn a new playbook nearly every year.

Saints Defense vs. Redskins Offense  Sad to say that its only week 2 and our roster is already starting to look beat up. Injuries abound at every area of this defense. At defensive tackle Hollis Thomas is out indefinitely and Antwan Lake will not play. The Saints looked pretty weak in run defense last week so the Redskins will look to exploit that with running backs Clinton Portis and Ladell Betts. Portis looked pretty solid last week against the Giants gaining 84 yards on 23 carries. Portis averages 101.5 yards in FedEx Field home openers with three touchdowns.Betts can do some damage in his own right.

Sedrick Ellis and Kendrick Clancy will be responsible for getting a push up the middle and stopping a formidable ground attack from Clinton Portis and Ladell Betts. Newly acquired DT Alvin McKinley may or may not see some time. (On a side note, he rounds out the Saints all black, all Irish tandem of Deuce McAllister, Mike McKenzie, Bobby McCray and now Alvin McKinley. Seriously has any team ever come close to this many "Mc's" at one time before?) If the Saints can get good pressure and a solid performance from its highly paid ends, Jason Campbell could be in for a long day. Getting a good rush to throw quarterback Jason Campbell off his game will be crucial to help our secondary.

In the linebacking corp the team will be without Scott Fujita while Mark Simoneau is done for the season. Man this is getting ridiculous. Troy Evans should get the start now. Look for Vilma to continue to increase his level of play and be all over the field.

Of course the Saints secondary is what everyone is still focusing on and, like the rest of the team, is battling the injury bug. Roman Harper and Randall Gay are both listed as Out for the game. The good news is Mike McKenzie has been listed as Probable and he should be a go. That leaves MM and Porter as your starters, the best combination so far in my mind. The Redskins have two talented receivers in Santana Moss and Antwaan Randle El. This will be a huge challenge for our two cornerbacks

The Redskins offense has struggled a good bit on first downs so it will be crucial to close out the drives and come up big on third downs and allow themselves to get off the field quickly and stay fresh. Third down percentage is always an important stat and tomorrow it will be more important than ever.

Random Prediction: The Saints defense will have at least 3 sacks.