Share All sharing options for: Saints @ Redskins: Breaking it Down - First Quarter 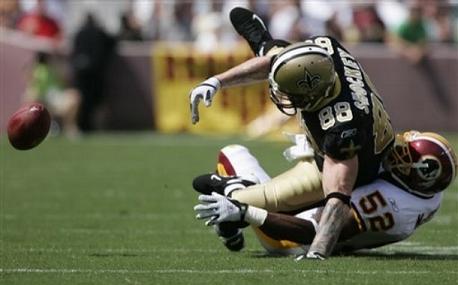 I know none of us really want to relive this disappointing game but we must move on and learn from our mistakes. Let's take a deeper look at the game.

Everything starts off peaches and cream. The Saints hold the Skins on the first three downs but give up a third and 8 and blow a chance to gain good momentum to get off the field quickly.

They hold the Redskins to third and 5 but again give up a first down. Campbell throws a quick slant to the right side. Tracy Porter is giving an 8 yard cushion and Kaesviharn an even larger one when only 5 yards are needed for the first. That means they are standing a good bit behind the first down line and the plan appears to be "keep everything in front of them." When the receiver makes the catch in front of them, neither react fast enough.

Still the Saints hold them one more time, thanks in part to Jason Campbell blowing what would have been a completion for big yardage, and force the Redskins to kick, and miss, a field goal. Really not too bad. A "bend but don't break" defense that forces field goals all day and a high-powered offense should make for a lot of W's right? I'll take it.

First play of the drive sees Reggie Bush run it off the right side. Why not use Pierre instead in that situation? The Saints offense came out flat and this drive really should have been three and out but a stupid unnecesary roughness penalty by the Skins keeps the drive alive.

Offensive line didn't look good at all. Jamar Nesbit gets a holding call and bad protections allows Brees to take a hit that forces him to make a bad throw and Patten has to become a defender instead of a receiver to protect the interception. Last week it did get picked off. On another play reminiscent of last weeks game against Tampa, Brees catches Washington offsides and gets a free play. Unlike last weeks awesome touchdown pass to Devery, this one gets picked off.

We all know how it ends. Shockey gets the first down then fumbles then appears to be held down by the defender. Not sure what the rule on that is.

The Redskins keep it on the ground and attack the right side of the Saints defense for consecutive runs of 10, 5 and 27 yards. The good news is the Redskins use their final timeout of the half on this drive.

Saints hold the Skins to third and 10. The defense shows blitz as they have ten players on the line. Grant jumps offsides but it doesn't matter because Campbell passes to Randle El. It's Craft getting beat as Randle El gets about 4 yards after the catch and eeks out the first down.

But again, the Saints refuse to break in the red zone and forces another field goal attempt. Suisham makes this one. Overall, not good but not awful either. A better team would probably have gotten seven points. The Saints are also lucky.

On the first play Reggie gets the pitch to the left side and looks like a deer caught in headlights when he realizes he is surrounded and can't dance his way out of this one. His blockers just seem to "engage and release" and then move downfield to engage someone else, leaving the "released" guys free to go straight for Reggie. I really just don't get this one. No wonder Reggie can't do anything.

The next play is a tipped Brees pass that Chris Horton grabs for the interception.

End of the quarter: Redskins 3 - Saints 0

This wasn't a great showing but it wasn't the worst either. Again, we could have been losing much worse had we been playing a more talented team with a better ability to close the deal. The turnovers were of course a killer. Not much to get excited about. The offense was especially disappointing.