Share All sharing options for: Saints @ Redskins: Breaking it Down - Second Quarter 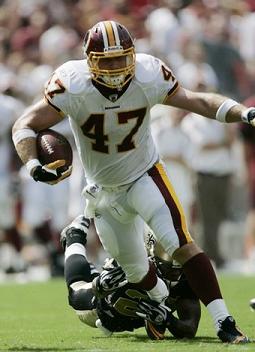 This might have been the best drive of the game for the Saints defense. They make two nice run stops and on the second down play, Tracy Porter makes a nice quick hit on Chris Cooley for a gain of only 6 yards. Campbell had all day to make the pass. The unit is able to get off the field quickly.

This drive was just pure crap. Bush has no where to run. Stinchcomb gets beat and allows Jason Taylor to sack Brees.

It's funny because whenever I re-watch some of Reggie's runs I find myself noticing this: When he attempts a run between the tackles, it often appears that he has opportunities to quickly bounce it outside and find a lot of open space but doesn't ever notice and runs right into the pile.  Similarly, the situations when he is contained and has nowhere to go are when he tries to dance and change direction. Reggie is an amazing athlete with the ability to do anything as a running back but it seems when his mind is made up that he is going to run between the tackles, he shuts down the creative aspect of his talent. Reggie needs to do a better job as a decision maker and should get a little more loose and improvisational with his inside runs. This offensive line is not going to do him any favors, so he is going to have to make something happen. A good running back would do that.

After a fumble on the punt return by Randle El, the Saints take over on Washington's 27.

Brees and Patten have a miscomunnication issue as the Saints try and go for the touchdown right off the bat. It looked like the same play they connected on for the touchdown last week. Brees does connect with Shockey over the middle for a first down.

On a 1st and 10 play the handoff is to Reggie for a run up the middle. Kedric Golston gets through the offensive line untouched and is standing there just waiting for Reggie to make his move. It's ridiculous. Poor Reggie. Pierre Thomas takes over from here and makes a nice catch and dive for a first down. Thomas later takes it into the endzone after two goal line attempts.

More of what we saw earlier from this defense. Bending and giving up some decent plays including a completion in quadruple (I am only slightly exaggerating) coverage to Santana Moss for 14 yards and a Clinton Portis run up the middle for 11 yards but then tightening up deep in their zone.

Sedrick Ellis takes a roughing the passer penalty for 10 yards.

After fumbling the punt on the last possession and missing two field goals, the Redskins are just begging us to run away with this game. Of course we don't. It is this fact alone that makes me wary of future opponents. Good teams will not give you those opportunities.

On first down Reggie runs between the tackles with Mike Karney in front of him. He strictly follows Karney which gets Bush into trouble as the hole closes up in front of him. Again, it looks like there is an opportunity for him to bounce it right and into space but he just plows forward. I wouldn't expect any average NFL back to see these opportunities and make those cuts and decisions but this is Reggie Bush we are talking about. It seems that if any player could do it, Reggie would be the man. This is the same player who, on the very next play, hurdles over Shawn Springs. Regardless, this offensive line could be creating much better opportunities for Bush to succeed. Additionally, I have to ask again why not run this play with Pierre?

I'm gonna start this whole thing by admitting that I just don't get this defense. I don't. Someone please explain it to me. No comprende. They look awful the first five or six plays but finally get their act together to force yet another Redskins field goal attempt. I am laughing right now but it is that kind of laughing where you're actually angry and a little confused. So angry and a little confused that its actually funny and you just can't help but laugh at how angry and confused you are. You know what I am talking about? Allow me to explain why I am laughing like this.

After giving up a six yard run and two eight yard passes over the middle all in a row, Campbell completes a pass to Chris Cooley over the middle in between the coverage. It gets even better with, are you sitting down, four missed tackles! Including Vilma! Cooley gets an extra eight yards after the catch. This play makes me want to bang my head against a cement wall repeatedly. Then all of a sudden they tighten up. Dunbar makes a nice pass break up, they do a great job of containing Portis on an outside run and the secondary's coverage forces Campbell to throw one away.

This was a great drive that allowed the Saints to grab the lead before the half. 59 yards in a little over a minute is exactly what we should expect from this team's offense.

Reggie had two nice runs up the middle, both for nine yards. Nice blocking created some holes. Amazing how that works. A 22 yard completion to trusty old David Patten and a short pass over the middle to Reggie who gets out of bounds puts Gramatica in position to make the field goal. Ummm...where was that all half?

It's amazing that the Saints are actually in the lead at this point in the game. The good news is that they haven't really played well and they are still winning the game. All they will need to do in the second half is play the better brand of football they know they can play and this game will be over.