Share All sharing options for: Saints @ Redskins: Breaking it Down - Third Quarter 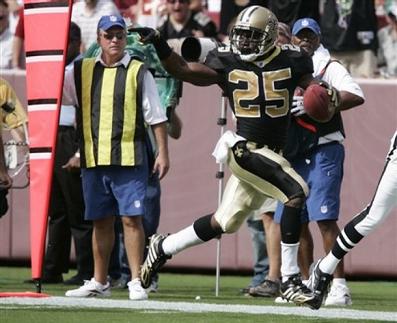 Pierre Thomas takes the kickoff in the endzone for the touchback. Another awesome kick off by Suisham.

On a first down play Brees drops back to pass but it's tipped by Jason Taylor. Stinchcomb gets pushed around a bit and definitely had his hands full with Taylor all day.

The big play on this drive was Deuce McAllister's first run of the season. On 1st and ten Deuce took the handoff right up the middle for 5 yards then checks out of the game after the next play. What's interesting is that on the run the middle of the line parted like the Red Sea creating a huge hole for Deuce to run up. I have never see them block so well all game. Does this line just refuse to block for anyone but Deuce?

The whole thing is capped off by Robert Meachem's first catch and first touchdown. He is wide open for the score after Shawn Springs fails to follow Meachem toward the end zone and winds up covering nobody. Brees underthrows and Meachem has to make the adjustment as the cornerback almost makes a play on it.

The offense appears to have picked up where they left off on the last drive of the first half. Nice catches by Pierre Thomas, Reggie Bush, David Patten and Mark Campbell. It appears this unit has is finally starting to click. This is surely the beginning of the end for Washington.

Just as our offense gets better, the defense gets worse. The first play is a pass to Chris Cooley. Scott Shanle completely whiffs on the tackle. So frustrating. The run defense in particular looked poor. Portis and Betts ganged up for a total of 56 yards up the left side alone.

Just as the Saints look like they are going to continue with the "bend but don't break" policy when Will Smith gets his first sack of the season on 3rd and 8, Jason Craft is flagged for holding. Automatic first down. Maybe this was the play that got him cut from the team yesterday. It sure hot me all hot and bothered. Of course, it only took two more downs for the Redskins to get it in the endzone from that point. A failed two part conversion now puts them only two points behind the Saints.

Not much to write home about regarding this drive. A pass to Patten for 7 yards. Two mediocre Reggie runs. Drew gets sacked for 7 yards. Dump off to Reggie for only 9 yards on 3rd and 17.

The offense sucked on their last drive so that should mean our defense will be pretty reliable. Turns out to actually be true. The Redskins go immediately to the left side again on two consecutive runs. The Saints, perhaps expecting this and actually making a great in-game adjustment, make two nice stops followed by a Chris Reis coverage sack. Give credit to solid coverage by the secondary on this play, causing Campbell to hold on to the ball too long. Solid effort by the defense this drive.

The Skins punt it away and we all know what happens next. Reggie turns the left corner with speed and heads up the sideline for 55 yards and the score. Reggie is always a factor and I love having a weapon like him on our team. The taunting penalty was stupid and he should know better not to do things like that.

With the Bush punt return the Saints have the all important momentum in their favor going into the fourth quarter. Things are still looking good for the black and gold. One of the things that revealed itself in this quarter that is often a problem of the Saints is inconsistency. The pattern of good offense/bad defense/bad offense/good defense is maddening. I am not really sure what causes that.