Share All sharing options for: Saints @ Redskins: Breaking it Down - Fourth Quarter 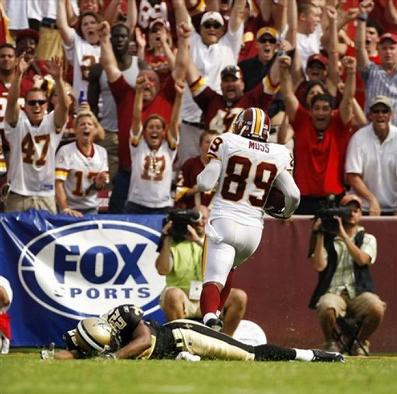 This is where it all falls apart. Let's see what happens.

The defense actually looks solid still on this first drive. A run stop for a loss of two, an overthrown ball (Porter was right there) and forcing Campbell to go to his fourth option on third down and the Saints make the Skins go three and out. Redskins fans are booing now in anticipation of a loss. Things are still looking good for the Saints.

After getting a first down off a Brees scramble, Drew then takes a shot deep on first down looking for Devery Henderson assuredly intending to put the game away. Had the pass been complete, the entire outcome of the game would probably have been different. Back to the play and I hate to say it but it appears that the ball is underthrown and Henderson has to slow down to make a play. Drew is human. If the pass was thrown perfectly, Henderson probably would have dropped it anyway. Regardless, the poorly placed pass allows LaRon Landry to get his hand in and make a great play on the ball.

Following that failed attempt Deuce gets the call for the second and final time of the game, making a nice run up the middle for 5 yards.

LaRon Landry makes yet another important play breaking up a pass intended for David Patten and forcing the Saints to punt. Drew is visibly angry because he knows the pass was thrown a little behind Patten.

The unit starts off strong with Will Smith getting his first sack of the season for a loss of 12 yards.

The Jason Campbell Passfest then begins. He completes five consecutive passes for a total of 82 yards. This is the moment of breakdown. The secondary becomes non-existent. If you look hard enough at Moss' 25 yard catch you can quickly see Josh Bullocks go flying across your screen from right to left, doing what I believe is his version of tackling. More like ankle biting. On the same play Usama Young does his best Josh Bullocks impression and totally whiffs on a tackle. A trained monkey would be an improvement.

The Redskins decide to end Passfest and keep it on the ground in the red zone. Portis only needs two carries to gain 12 yards and get the touchdown.

Saints are still in control. All they have to do is put together a decent drive and run out the clock, or at least a lot of it.

The Saints are quickly faced with third and one. They give it to Pierre Thomas on the right side to gain the single yard. He has absolutely no where to go and the Saints decided to punt away and let the defense win the game instead of go for it. Turns out to be a bad decision.

This third down play is crucial. If the Saints could have just gotten a first down they could have killed more time off the clock or at least forced Washington to burn some of their timeouts. The run blocking was just pathetic on this play and I don't think even having Deuce in to run would have helped.

We know what happens next. I don't even really want to get into this play as it is straight up pathetic. Santana Moss was way behind everyone on our defense. Up by two points late in the fourth quarter and our defense is not playing deep!? Josh Bullocks, like LaRon Landry on the Meachem touchdown, was standing in the middle of the field 30 yards away, not covering a damn soul and staring at the ball as it passed high above his head. Bullocks needs to be replaced! A beat up Tracy Porter had no chance one on one against Santana Moss.

No worries. The Saints are getting the ball back and all they need to do is put up another score.

After Reggie Bush picks up the first down and runs out of bounds, Brees has a pass tipped at the line and Chris Horton strikes yet again intercepting the ball.

The Saints defense gives it one last effort and does a good job stopping Clinton Portis three times and holding the Redskins to fourth down.

On 4th and 2 Washington decides to go for it rather then give the Saints one last chance. Fittingly its a quick slant to Santana Moss for the first down and the Skins take a knee the rest of the way.

This quarter was just a complete shut down of both the offense and the defense. The offense gained a total of 44 yards for the entire quarter while the Redskins totaled 169 yards. If there are many more quarters like this one in the Saints near future, this year will be long and heartbreaking.