Share All sharing options for: Behind Enemy Lines: Denver Broncos 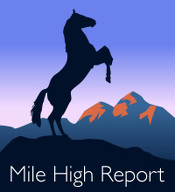 To help us get more familiar with the Denver Broncos before the Saints upcoming game with them this sunday, I exchanged questions and answers with TheSportsGuru of SB Nation's Broncos blog Mile High Report. If you haven't taken a peek at what is going on over at MHR I definitely encourage it. They have an incredible website that makes CSC look cheesy. Be sure to check my answers to his questions here.

CSC: It's been three years now. How do you and other Bronco fans feel about Jay Elw...errr....Cutler?

TSG: You nearly said the way we feel about #6. He has been better than advertised and exceeded expectations. We all knew Cutler had a rocket arm, and being a Vanderbilt guy, we knew he had the brains. What he also has is that "IT" quality people talk about. Cutler is at his best when the stakes are at their highest. I can't speak for all Broncos fans, but I knew this kid was something special when I heard the Diabetes diagnoses. That sounds strange, but when you look at his 2007 season, his first as a starter - 3500 yards, 20 TDs, 14 INTs - it was solid for a quarterback his age. When it came out that he lost all that weight(from 235 - 200lbs) during the season and still put up a respectable season I knew that if he could get the situation under control that he would be a star. Through two weeks that's exactly what has happened. Mike Shanahan has said that for the first time since Elway he can utilize 100% of the playbook. Needless to say, we are excited about the prospects of watching #6 for the next 10-15 years. Having 1 legend play for your team is rare, getting a 2nd one so soon afterward is almost unheard of. The Broncos may have struck the jackpot again.

CSC: The matchup between Drew Brees and Saints receivers against the Bronco's talent secondary should be interesting to watch. Whats the status of the secondary? Any key injuries?

TSG: Health-wise, the defensive backfield looks good. Champ Bailey and Dre Bly are at 100%, and both starting safeties - Marlon McCree and Marquand Manuel - are good as well. What has hurt the Bronco defensive backs so far is the lack of pass rush. The Broncos are putting 8 in the box to stop the run at all costs. That leaves 3 DB's to handle the passing game. Manuel will usually shade to Bly's side, leaving Bailey all alone. Give any quarterback/wide receiver 5 seconds to get open and they are going to do it, doesn't matter who is back there. I think this will be an interesting matchup because the Saints would prefer to throw the football. The Broncos may have to adjust what they have been doing to compensate for that.

CSC: What other key matchups or areas do you think will be important to keep our eye on this Sunday?

TSG: A huge key to the game will be a talented Saints D-Line going up against a young Broncos O-line that is playing very well, allowing only 1 sack all season. The Broncos are going to have success this season when the offense is putting points on the board. Now that teams have a couple of games to look at it will be interesting to me to see what adjustments D-Coordinators make to try and slow it down. One matchup in particular will be rookie LT Ryan Clady and 2nd year RT Ryan Harris going up against Charles Grant or Will Smith. The kids have kept Cutler clean through two games, which have allowed the Broncos offense to go up and down the field. Grant and Smith have the talent to get to the quarterback. I will be watching that matchup very closely.

CSC: Any big news on the injury front for the Broncos that may affect the game that we should know about?

TSG: Knock on wood, the Broncos are very healthy. WR Darrell Jackson won't play because of a calf injury, and C Tom Nalen has yet to play this year while re-habbing a gimpy left knee, but other than that the Broncos are in the clear.

CSC: The Saints just picked up DT Alvin McKinley last week from the Broncos. What did we get with him? What should we expect, if anything?

TSG: A steady, veteran presence. I was actually surprised a bit when the Broncos let McKinley go because he is solid against the run, but the Broncos are committed to getting younger and McKinley just didn't fit the philosophy. A guy the Saints can use 15-20 plays a game, McKinley is a solid, fundamentally sound player.

CSC: I want two honest answers. First, would you rather the officials have gotten the call right and the Broncos lost the game in the name of good sportsmanship, or are you just happy it worked out in the Broncos favor? Second, before the actual play, did you really want Shanahan to go for two?

TSG: Honestly, I never want a game to be decided by an official. I want the players to decide the game. That said, I also don't buy into the argument that Hercules cost the Chargers the game. Hey, San Diego, make a damn play! Even after the fumble that wasn't, the Chargers had three more plays to stop the Broncos but couldn't. It is unfortunate that things turned out the way they did, it really is, but the Broncos racked up nearly 500 yards of total offense, and scored the TD and 2-point conversion on the same play. San Diego had opportunities to overcome adversity, and like usual, they did not. Chargers fans need to look no further than last year against the Colts in the regular season for an example when a blown call won a game for them. What goes around comes around.

As for the two-point conversion, hell yes I wanted the Broncos to go for two. The Broncos hadn't kept the Chargers out of field goal range the entire second half. A coin toss is a 50/50 proposition, with the percentages high that the Broncos would never see the ball if they lost the toss. So, logically, what are the better odds for the Broncos? 50/50 on a coin toss, or Jay Cutler, Brandon Marshall and Eddie Royal, 1 play from the 2 yard line. I think the decision is a no brainer. From a team standpoint, if I were a player in that locker room, I would prefer to lose the game trying to win it than to lose the coin toss and watch the Chargers drive the field in my backyard to beat me. That is a more demoralizing way to lose. Credit Shanahan for doing it and shame on San Diego for not making a play.

CSC: What's your final prediction for the game?

TSG: This game has the chance to be more wild and crazy that the Chargers game, which probably means it will be a defensive struggle. Seriously, the loss to the Redskins last week as to have the exact opposite effect on the Saints that the win against San Diego has on Denver. A dome team, coming to Denver, where the Rocky Mountain Thunder has returned, with no one in the defensive backfield to stop Brandon Marshall, I'll take the Broncos.