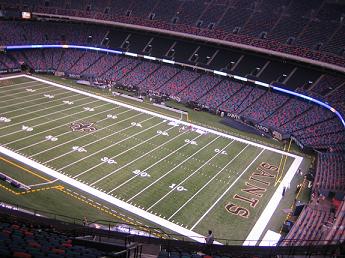 Will the Dome remain empty this weekend? (Photo Source)

In the wake of Hurricane Gustav there are still many question marks up in the air with regards to the current state of New Orleans, southern Louisiana and its residents. The situation appears to be much more positive and optimistic, as Hurricane Gustav begins to fizzle, then was previously expected before it made landfall. Evacuations went exceedingly well, the weakened levee system held its ground and overall destruction and damage has to be viewed as relatively minimal to what was once thought possible. If round one went to Katrina, round two most certainly goes to New Orleans. As we begin to turn our attention back to more epicurean matters, one question now remains: what to do about this week's home opener at the Superdome?

As it stands now the Saints and Buccaneers are scheduled to meet in New Orleans this Sunday while the Saints will travel to Tampa Bay on November 30th for their second divisional match-up. If playing in the Superdome doesn't appear to be an option as we learn more about Gustav's effects, the most likely and plausible alternative would be to switch the locations of those two games and have the Saints travel to Tampa this weekend while the Buccaneers would play in New Orleans in late November.

Assuming this could be worked out with the schedule of both stadiums, it is something that should be taken into serious consideration. Don't get me wrong, I would love to come back to the city this week and immediately be able to attend the Saints home opener as I have been planning for months now. Assuming a capacity crowd, the dome would surely be rocking and the atmosphere would probably be electric, bordering on the intensity that was present for the home opener against the Falcons following Katrina while also giving the Saints an increased home field advantage. To be sure, the team and the facility want to move on with life as planned. However, as much as we all love football and even more so, our Saints, we should all keep the bigger picture in sharp focus. Our families, friends and personal lives should all come first. Switching this first game to Tampa would give the team three away games to start off the season and give the city three weeks to get back on its feet and better prepare itself to play host for an NFL game. It certainly wouldn't be the worst idea to take this opportunity.

There a few factors to consider before holding such an event at the dome.

1.) Structural damage, if any, to the Superdome.

2.) The ability to get food products transported to the facility this week.

-Doug Thornton, regional vice president of SMG, via the Times-Pic

As far as structural damage is concerned, certainly it should be taken seriously and checked thoroughly. Any glossing over in this area would put employees and fans at risk. With regard to the final three points, we must remember that Saints fans and it's employees come from not just New Orleans proper but all over the Gulf Coast region. While the city of New Orleans has fared well during Hurricane Gustav, other parts of the region did not and many people will need to return, check on their homes and family and deal with any necessary issues that linger from Gustav's path. With regards to the fifth point in particular, I am sure no one, fans and Mr. Benson alike, want the Superdome's seating capacity only half filled, for reasons both financial and fun. Let's take our time, gather our bearings and stay focused on the task at hand. As good as things are looking right now and as relieved as we may all feel, there is still a lot to be done and much more to stay focused on. There will be plenty of time in the near future to concentrate on football. You could take the Saints out of New Orleans anytime and the city would continue on, but take away the residents of New Orleans and the Gulf Coast and this Saints organization would be nothing. It is we, the fans, who support this team and make it what it is. Therefore, our recovery is imperative and should be the ultimate primary focus.

An argument might be made that keeping the game here in the city of New Orleans and hosting such an event so soon after such a powerful storm would be a great show of our cities resilience and strength while helping boost morale, and I think that would be true. Here is what Mickey Loomis had to say about the possibility of playing in the dome this Sunday.

"I think it's important for a couple of reasons. Competitively, it's a home game for us and we want to play at home and want to get off to a good start and we would be most comfortable in the Superdome. But more importantly, I think it's an opportunity for us to lift the spirits of our community after a tough week and that's really important to our team." - New Orleans Saints official website

If the decision is made not to return this Sunday, it should not be viewed as a sign of weakness or distraught. There is no need to rush this. We know they will come back eventually, and we will be here with open arms when they do. It won't take the Saints returning to show our citizens and the rest of the country that we are doing fine. That we did an amazing job, top to bottom, in preparing for and handling this storm. The sensationalist news channels were stymied, left only to discuss how smoothly everything went instead of pointing out gross governmental deficiencies as they are wont to do. I don't feel New Orleans has anything to prove. The lack of water in the streets, helpless, un-evacuated people at the Convention Center and widespread looting throughout the city should all speak for itself. Let's be sure take our time with this one and continue doing things right, finish the great job we have started and see this through all the way to the end. Though it wasn't hard to improve on the cities hurricane preparedness before Katrina, our city and its officials look much better in the national spotlight this time around. Now is not the time to risk any undoing of that good publicity. If the necessary officials decide to continue to host the home opener this Sunday, I surely hope that it is done well.

The fact of the matter is, this was the first test for post-Katrina New Orleans and the city passed with flying colors. Following 2005, I think I speak for many of the city's residents who returned to live in New Orleans when I say that since Katrina, there has always been a dark cloud in the shape of a question mark looming over all of our heads. Would our beloved city be able to hold up to another large storm? Would we do a better job of evacuating, particularly those who are in need? Would the levees be able to withstand significant pressure? We now have some answers. I have not had the opportunity yet to talk with my fellow New Orleanians, but I can safely say that I myself will return to New Orleans with a renewed sense of confidence and security. We know this wasn't "the big one." We know it could have been much worse. The fact of the matter is no matter how prepared New Orleans may be, or any city for that matter, a direct hit from "the big one" will be catastrophic and there won't be much anyone can do to prepare for or stop it. It's how the city handles the close calls and the near misses that define how prepared New Orleans truly is.