Share All sharing options for: Short Yardage Shortcomings and Scapegoats 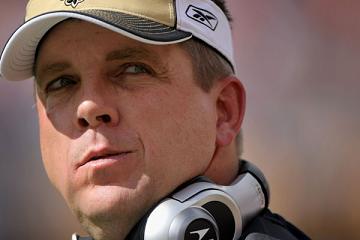 Here we are on another Monday following yet another Saints loss. Another game in which the team played less than spectacular but managed to find themselves in a position to win. Another game the Saints could have won if they could only just close the door and finish the game.

When looking back at any football game, one can always look to several key plays during the course of the game that, had they gone only slightly differently, could have easily changed the direction and/or outcome of the entire game. There were two of those plays yesterday and one play last week that now have Who Dats up in arms. Of course I am referring to the 3rd and 1 run by Pierre Thomas late in the game that could have kept the clock running as well as his fourth down attempt on the goal line at the end of the first half. Let's also not forget about last weeks short yardage situation that Pierre Thomas also failed to convert. Switch the outcome of those plays alone and the Saints could be sitting on top of the NFC South at 3-0 instead of looking up from 1-2, leading many fans to question, "What the hell were they thinking!?"

The fact is we could analyze every play of every game we have ever played. We can go through the "what if" game every Monday until our eyes bleed but that won't get us anywhere. And let's face it, we also wouldn't be so focused and upset about Payton's decisions or Pierre's inability to gain a yard if Gramatica makes that kick and the Saints win the game. In that situation, they are just brief mentions that get ignored and filed under "needs to get cleaned up" as we happily and blindly look forward to the Niners. Yet we still play the "what if" game, pretending we know more than the professionals, so here I am to defend.

Let's talk about Payton first. Personally, I agree with those angry with the coach. Payton definitely could have called the game better. Run those particular plays differently, and the outcome of both games may be drastically changed. Maybe we should have passed. Maybe we could have used Karney. Why the heck did Bush check out of the game on third down anyway!? I agree that there is probably a Payton mistake or two lying somewhere in there. But to put the blame squarely on this shoulders because a small percentage of plays didn't go the right way is absurd.

Maybe Payton did make some poor decisions during the game but so did his players and they are the ones out on that field. Their actions are directly tied into the outcome of each and every play whereas both Sean Payton's good and bad play calls are only indirectly tied into the results of each play and ultimately the entire football game. It is incumbent on the players to execute! How many times in your personal life, be it at work or at home with your family, have you asked or told someone to do something only to find out they didn't do it to your liking if at all? Putting blame on him for two plays out of a total of 58 plays throughout the course of an entire game is ridiculous. There were quite a few other plays out of the 56 remaining plays that didn't go too well. What did Payton's play calling have to do with Reggie Bush coughing up the football that wound up getting picked up and returned for a quick six points? If that single play never happens and Reggie holds onto it, the Saints don't even need Gramatica at the end of the game. What about Jason David's Pass Interference penalty on a crucial third down and seven play? Was that Payton's arm outstretched and grabbing onto the receiver? If David backs off that receiver and the pass goes incomplete, the Broncos don't score a touchdown five plays later as is the case in real life.

Mistakes are made by everyone involved throughout the course of a football game. There is plenty of blame to go around as both Payton and his players made numerous mistakes yesterday, some more obvious then others. They all add up to form what we all call a football game. The sad truth is that Payton actually called a pretty darn good game only to be let down by his players. He took everything that happened in the first 58 minutes of the game - the good and the bad - and still put his team in a position to win. I mean hell, we came back after being down 21-3! To blame him completely for the loss is just plain unfair. At the end of the game all Payton could do was take the lemons that were given to him and make lemonade. If Payton deserves jeers for his bad play calling then he certainly desrves an equal amount of cheers for getting this team back in the game. The truth is that this game wasn't always pretty and it certainly wasn't always perfect but it was there for the taking. Gramatica and the Saints just couldn't close the door that had fortunately creeped open for them. If there is one criticism of him at all it should be that he's not doing enough to get these players to perform to the best of their ability on a consistent basis. That his ability to motivate is lacking. Particularly the offensive line. It is not entirely to rest on his play calling. The majority of the blame lies with the players who just did not execute. Payton didn't let this team down, the team let themselves, the fans and Payton down!

Then of course there is my boy Pierre. You better believe I am going to defend him on this one. I will make this as clear as possible for everyone reading so there is no miscommunication. The problem is our offensive line. Did you get that? Write it down if you have to. If they are a member of the Saints and their name begins with a "J," I would say there is a good chance they are at fault on these short yardage plays. I will let faithful CSC reader MobileSaint take it away on this one, as I think he sums it up perfectly.

Somebody has to seal the backside on that 3rd and 1 play. There is no running back on the roster or in the league who can get the first down if that guy isn’t blocked. No problem with the play call here. Execution is the problem.

The other problem I have with the way the Saints use Pierre Thomas is frequency. I like Reggie Bush and by no means do I think Pierre should be any kind of replacement for him. However six touches in one game is not enough for Pierre to get into a rhythm. I don't think it's fair to expect him, or any back in the league for that matter, to come up with some big, game saving play when he's been standing on the sideline most of the time. He was successful in Chicago last season because he was the main guy. If the Saints want Pierre to succeed, they have to give him a chance instead of expecting him to change the world with a few touches. Of course you smart readers out there might say, "Well isn't that Payton's fault? This is why he needs to go!" Again, I have already admitted Payton is not perfect. Does that mean Payton is the worst coach ever and cost us the game? No. Does it mean he should b fired? No. Do his players need to execute when called upon? A resounding yes!

After a loss like yesterday there is plenty of blame to go around. Certainly this offensive line is part of the problem. Unfortunately, their poor play affects so many other areas of the game. When they have a bad day, a few other playerss have bad days as well. Gramatica, unfortunately, must share some blame as well. It sucks that the Saints made many mistakes during the game and had to put the game squarely on his leg but that was the situation and that's what he gets paid for. Martin, like so many Saints yesterday, just didn't execute. I'm sure the NY Giants didn't play the perfect game they wanted to play yesterday, but in overtime with the game on the line, former Saint John Carney kicked the game winning field goal. I am having a hard time remembering why we ever got rid of him.

At the end of the day it all came down to bad execution, most notably by our atrocious offensive line. Start pointing your fingers.