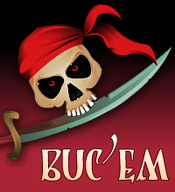 It's that time of the week folks. Time to get a little more intimate with our upcoming opponent. JScott, of Buc 'Em fame, and I exchanged five questions regarding this weeks season opener. Here is what he had to say about his team and Sundays upcoming matchup. And of course, you can read my answers to his questions right here.

CSC: For some reason Joey Galloway always has huge games against the Saints, regardless of his age. Should we expect that on Sunday? Has his age finally caught up to him yet?

BE: Galloway is probably the most unknown aspect we have on offense. He hasn’t played a single down this Pre-Season and he didn’t play well in his last performance (Wild Card Round of the Playoffs against the eventual SB Champs).. With that said, he is expected to start and I would expect him to hurt your secondary once again. With Antonio Bryant starting opposite Galloway, we finally have another receiver that will pressure the defense into covering him (don’t laugh). In years past the defense would hone in on Galloway as even if Clayton got open there was a 60/40 chance he would drop the ball. Don’t rest easy on Galloway just yet Saints fans, if anything he has the freshest legs of his career going into this season.

CSC: You lost out on the whole Brett Favre fiasco. Are you and other Buc's fans upset? Is Jeff Garcia finally happy? Explain the quarterback situation you guys have over there.

BE: I’m not upset, but I’m definitely disappointed. Right now the Bucs QB situation is in Journey mode for the next several years. If you polled the entire NFL fan base as to who they would rather have Quarterback their team: Favre or Garcia, hands down Favre would win and that’s my thought process. Sure Garcia can get us to the Playoffs, but I don’t think he can take us the distance and that’s purely based on Garcia’s inability to stay healthy. Favre is Cal Ripken of the NFL, he’s a sure fire hall of famer, and he consistently gets up after giving his all on the gridiron. Also, you can call me crazy, but I would have loved the media circus that would have followed Favre to town. It would have made for a fun ride and interesting stories.

I think Garcia is happy. He didn’t get replaced and put on the bench. I think his Pro Bowl appearance (he threw 13 touchdowns for Pete’s sake!!!!!) inflated his ego and made him think he was a better QB than he truly is, hence him crying about receiving more money this off-season. Rather than go on a tangent I’ll say that Garcia needs to stay on the field for a full 16 games and then and only then will he get paid and truly be happy.

As for the QB situation: Jeff Garcia is the starter, Brian Griese is set to back him up, Luke McCown is riding the bench until he gets it, and Rookie Josh Johnson is carrying a clipboard while preparing to be the Bucs QB of the future (no really he is). And yes, we have 4 Quarterbacks, eh…

CSC: How has your first round draft pick CB Aqib Talib been looking? He was a guy some people thought the Saints would pick up to help our beleaguered secondary. What about some of your other key acquisitions this offseason?

BE: Aqib Talib has looked fantastic this off-season. Whether he’s breaking up passes in the Pre-Season or picking off passes in Training Camp, Talib has really looked settled in. He’s already nailed down the 3rd Cornerback position as our Nickel Corner, which at first glance doesn’t sound like much and until you realize the Bucs ran a Nickel Defense 48% of the time last season. So, yeah, the Rookie has looked really good and we’re excited about what he can bring to the table… Dexter Jackson aka DJax is another fantastic acquisition the Bucs made via the NFL Draft. He was slowed early on in the Pre-Season with a sore hammy, but he returned an 83 yard punt for a touchdown in our final Pre-Season game and he’s gained 10+ yards each time he’s touched the ball on offense (end arounds, screens, etc). He’s going to provide a great source of electricity on offense that this fan base hasn’t seen to much of outside of our White Tiger aka Joey Galloway.

CSC: Jeff Faine, former Saints center, is now a Buc this year. I have read quite a few articles about him this offseason and it seems like you guys are pretty happy about him. Is that true? How is he looking? Is he happy?

BE: I think the fan base has definitely welcomed him in with open arms. Any time you can bring in a young, tough, and key cog to the offensive line its hard not to get excited about the decision to bring the guy in. He’s looked great in camp and in the limited time he’s seen the field during the Pre-Season. We haven’t had a single botched QB to Center snap and so we’re all pretty pleased; as that cost us against the Lions last season. Our dirt dog in Chris Hovan voiced publicly about how happy he was he didn’t have to line up against Faine anymore so for a battle tested veteran to say that, I think it speaks volumes as to the type of player we’ve added to our line.

CSC: What's your prediction for the game. It's okay, you can say the Buc's will lose.

BE: I think it’s going to be a ridiculously hard fought game. I envision LB Barrett Ruud stripping the ball from Deuce & Reggie again. I could even see Tanard Jackson, Jermaine Phillips, or Barrett Ruud putting Reggie, Deuce, or both players out of the game; those guys don’t play around when they lower their shoulders. I think our offense will once again embarrass your defensive backs and I think our Special Teams returning unit is poised to drop a"To-the-house ‘er"on you. As for the score I do think it will be a tight game: 24-13 Bucs!!!

Thanks for the interview and thank goodness FOOTBALL is back!!!