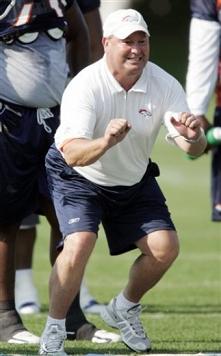 The Saints made the second move in their effort to vastly improve their defense this off-season when they hired defensive line coach Bill Johnson yesterday, replacing newly departed Ed Orgeron.

But the seeming high demand for Johnson may have put the Saints in a must-sign situation if they really felt strongly about him. Johnson just finished interviewing with the Packers, the Saints new coach-recruiting rival, and had another interview lined up already with the Seahawks following the Saints. I admit that this stands in stark contrast to my pleas for patience yesterday regarding Gregg Williams as defensive coordinator but I think it's necessary to differentiate the importance of the two positions. Remember also that the new defensive coordinator will already be left with quite a few other assistants that remain from Gibbs' reign. He may not like quite a lot of the defensive coaching personnel he will inherit but cleaning house and appointing a new team of coaches just ain't happening. Waiting to hire a new defensive coordinator and allowing him to choose his own line coach would have been a mere luxury.

I couldn't dig up too much dirt on Johnson. Be sure to read the introduction article on the New Orleans Saints official website. I also grabbed a list of Johnson's coaching resume found in the Bronco's media guide. Here's the rundown.