A while back I changed the feature poll to ask everyone whether or not they were listening to Forecast Radio, the twice weekly podcast that I co-host with it's creator, Ralph Malbrough - the guy whose articles you love to read so much at WWLTV - and fellow Saints blogger Kevin Held from Hakim Drops the Ball.

The results are in and I'll be honest - I wasn't really surprised that a large majority of you don't listen. But the good news is that you're not listening because you think we suck. It's because you don't even know we suck. As it stands now, 65% of you have voted for the option, "I don't even know what you're talking about." Apparently, I haven't done a very good job of getting the word out there. Allow me to change that.

Every Wednesday evening we host a live preview show and take a look at the Saints next opponent. We also discuss anything else going on in the NFL that we deem worthy of our time. Today is Wednesday, which means there will be a show tonight at 8pm Central. You can find that right here.

In addition to that, we also put together a live post-game show. It airs after every Saints game about an hour or two after the last snap. That's when we offer our immediate reaction, break down everything we saw from the day, go over the stats and take your phone calls to hear what you have to say about the game. They tend to me more fun because someone is inevitably drunk from alcohol or victory.

To listen, all you have to do is go to the Forecast Radio website (Go ahead and bookmark that) at the time of the show and click the show title under "Upcoming Episodes" to listen live. I always mention show times ahead of schedule on the main page of Canal Street Chronicles. The best part is that you can go to the website ahead of time and set a reminder so you don't forget to tune in on time.

But don't just stop at listening. Go ahead and give us a call. The number to talk to us is (347) 215-8037. The phone lines are open during every show so call us and talk about whatever you want. I know you've got something to say, especially right after a game, so let's hear it.

In the horrible event that you should miss the live show, don't fret my pet. I've made it easier than ever to listen to past episodes right on Canal Street Chronicles. The player can be found on the right sidebar about half-way down the page, just below the Fanshots. There you can catch up on the latest five episodes. In case you're a visual person, I've included a picture. 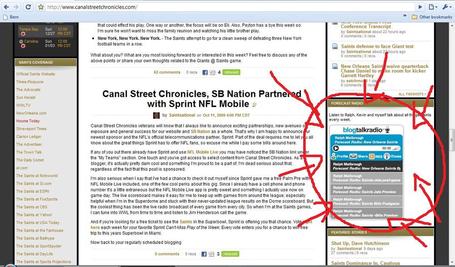 So start checking out the action going on over the internet airwaves; I think you'll be surprised.