Saints on Sports Illustrated Cover. Get Ready to Lose.

Share All sharing options for: Saints on Sports Illustrated Cover. Get Ready to Lose. 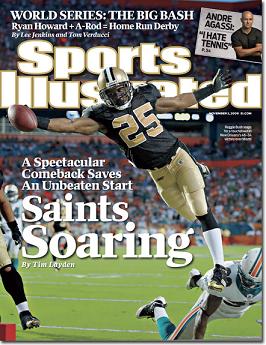 If you're one of those Saints fans who thinks the team deserves more attention from the national media this year, well, you just got your wish. Sports Illustrated will do, right?

With Reggie Bush's acrobatic leap from Sunday's comeback victory gracing the cover of this weeks SI, it's safe to say the rest of the country is finally taking notice. Problem is, it may very well signal the end to this wonderfully "perfect storm" of black and gold we've been witnessing so far this season.

In case you're unfamiliar, there exists such a thing called the Sports Illustrated cover jinx. Ancient folklore has it that whenever a team or athlete is placed on the cover of Sports Illustrated, they are doomed for failure at any moment shortly thereafter. Even the magazine itself acknowledges it. Check out their list of famous cover jinx's.

Still think it's not true or that it can't happen to the Saints? Then you won't want to miss number thirteen on that SI jinx list. They've already been the victims of the fated curse. After defeating Carolina in the first game of the season immediately following Hurricane Katrina, Aaron Brooks and John Carney were chosen for the September 19, 2005 cover, shown hugging. The Saints went on to lose their "home game" at Giants Stadium as well as a crapload of other games that year.

But that's not all. Sports Illustrated's cover has jinxed the Saints a second time and it's not included on their list. Their January 22, 2007 cover featured a closeup of the face of Drew Brees. The article was about the Cinderella story Saints of the 2006 season who were just one win away from the Super Bowl, led by the stellar play of new quarterback Drew Brees. Ahh, those were the days. Unfortunately, the Saints had lost that NFC Championship game in Chicago the day before. It never fails.

So now that the Saints have finally gotten the respect they deserve and the attention of the entire country, I hope you're happy. Because it's all downhill from here. If the Saints lose to the Falcons on Monday night, you'll know why.

Be careful what you wish for.