I hate writing these post-game intro paragraphs. The bullet points about my personal experience at the game I can handle, but finding something to say right here that will both sum up the events that just transpired while at the same time being inspirational and eye-opening is just plain difficult. Especially now that we're at the half-way point of the season and on the brink of something special. I leave that kind of stuff up to the talented Mr. Wang, who has a gift with words and eighties pop culture that I will never come close to attaining. A man can't breath, he can't fight.

I mean, what the hell am I going to say right now that isn't obvious to all of you or already being written by the people that get paid to do so. I consider myself to be one of the biggest Saints fans in the world and my team is currently eight and freakin' zero so how the hell do you think I feel? The same way you do, I'm sure. Amazed, excited, hopeful and - especially right now after that game - exhausted. Cheering your ass off in the Dome during a close, come-from-behind win takes a lot out of a man. I'm also the slightest bit hesitant, just waiting for that other shoe to drop because this is, after all, the Saints and this has been just too damn good to be true. But none of that means I know how to express that to all of you in some way that makes me sound profound and brilliant.

If I did have one cheerful or inspirational nugget from yesterday that I could drop on you it would have to be this: On a day meant to commemorate past players and members of the Saints organization and with many of them in attendance, the 2009 Saints continued their amazing campaign and went on to accomplish something that nobody in that building has ever seen in 43 years of history - the best start in franchise history by arguably the best team in franchise history. If that doesn't get you pumped about the second half of the 2009 season, I don't what would.

Can I get a freakin' Who Dat!?

Make the jump for all of my notes from the game and some pretty good pictures. 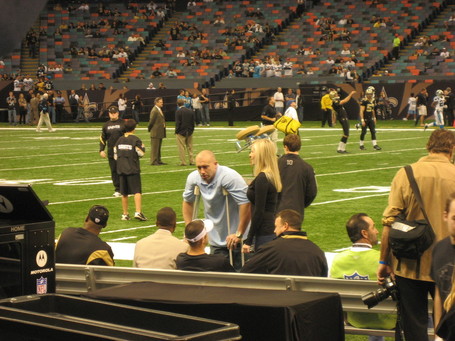 Heath Evans and his attractive wife. 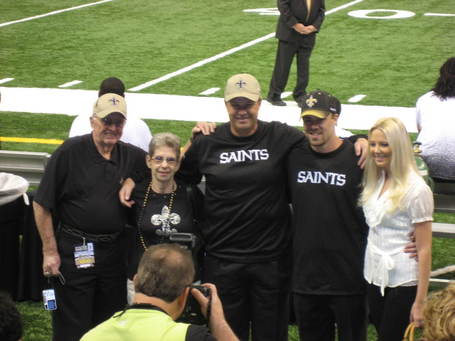 I am thinking I just got me a Williams family portrait. 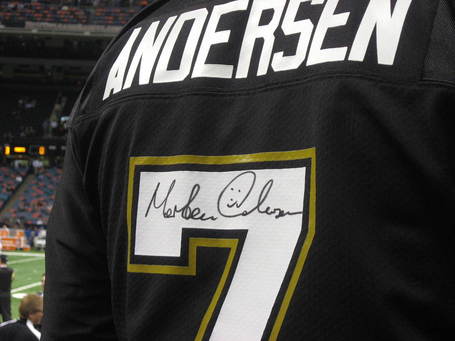 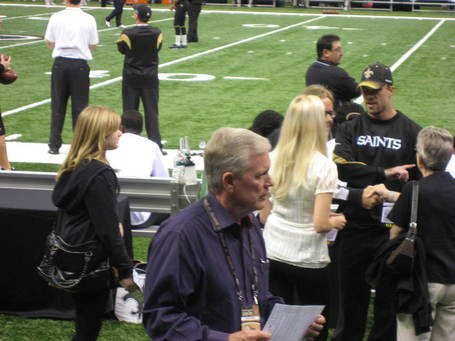 Jim Henderson (no relation to Devery) doing a little scouting before air time. 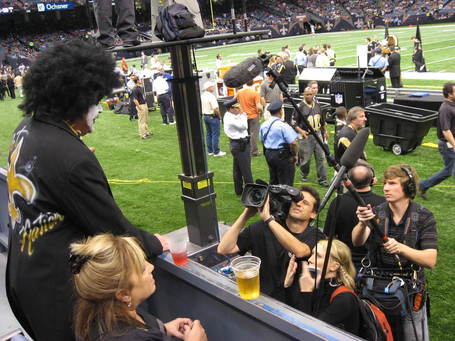 Getting some fan footage. The camera loves this guy. 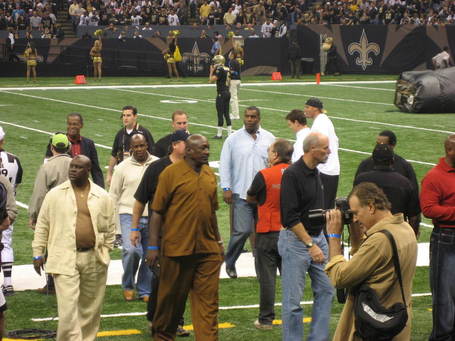 Some of the former Saints players. 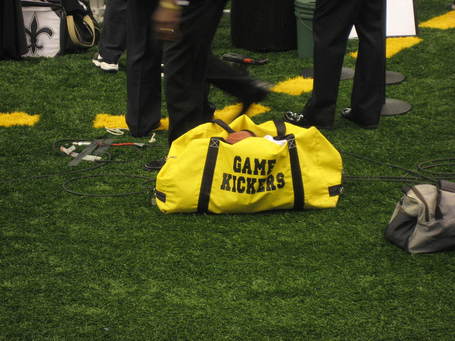 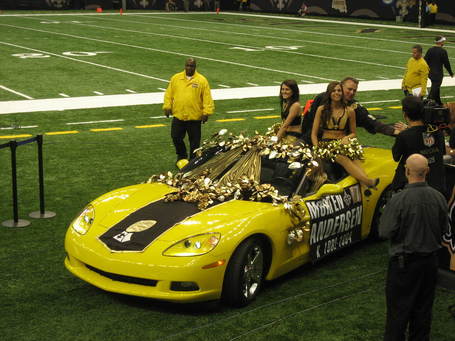 Morten taking a spin around the stadium. 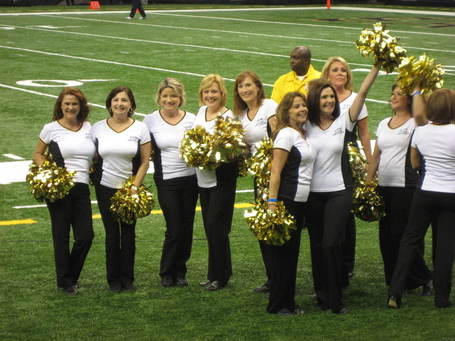 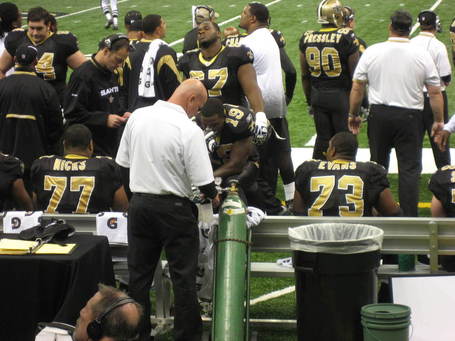 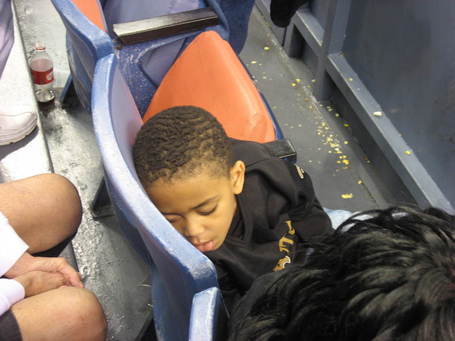 Taken after the Meachem touchdown. 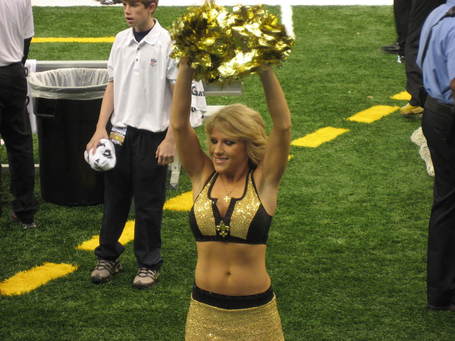 The tradition lives on. 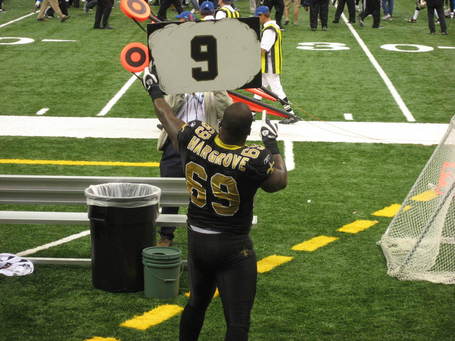 Hargrove walked over and took this from a fan in my section after the game. The other side he's showing off says, "History Begins Today. 8-0." 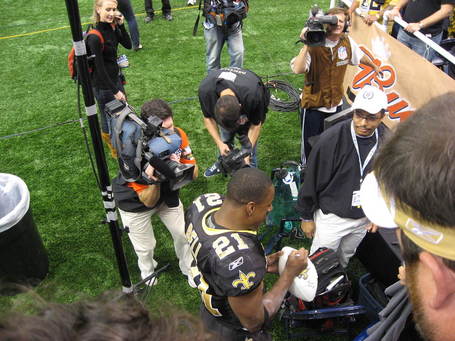 Mike Bell stopping by after the game. 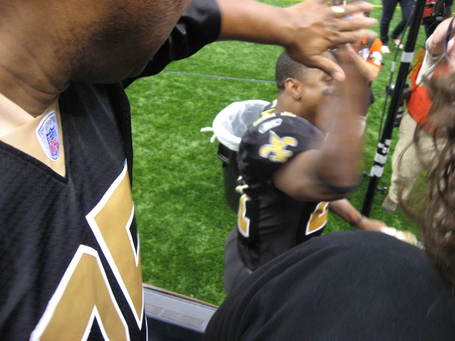 Here is the open thread roll call. I think we had some confusion regarding the second half overflow thread and had two separate conversations going. I plan on making second half threads a regular occurrence so start expecting the switch every week. Don't want anyone to miss anything.