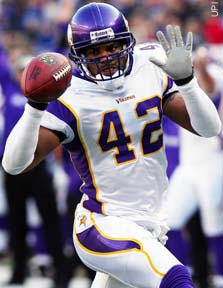 Now that the Saints have gotten themselves under the league mandated salary cap by releasing David Patten and Deuce McAllister it leaves the door at least slightly ajar to improve their defense by picking up a free agent. Today we're going to start a new series of posts in which we will examine some of the players the Saints may want to take a long, hard look at when the signing period begins on February 27th.

First up on the block is Minnesota Vikings safety Darren Sharper. It seems pretty likely that the Vikings will definitely not re-sign Sharper due to - what else - cap space. The Vikings also have a pretty solid backup plan with Madieu Williams and Tyrell Johnson at the safety spot. All of this combined with the fact that Sharper seems to have lost a step after 12 NFL seasons make him expendable in 2009. About a month ago Mike Florio of Pro Football Talk speculated that the Saints "may make a run" at Sharper.

I asked SB Nation's Vikings blogger, Gonzo, of Daily Norseman fame what he thought about Darren Sharper. Here is what he had to say:

Sharper's been a pretty good player for the Vikings for most of the four years he was in Minnesota, having made two Pro Bowl appearances in that time (2005 and 2007). However, in 2008, it looked like he lost a step, as he started taking bad angles to the football. His cover skills are still above average, but his tackling ability isn't nearly what it used to be. With Madieu Williams and Tyrell Johnson looking like the Vikings' safety duo for the foreseeable future, I don't think the Vikings are going to make him an offer. He could probably be a help to the Saints' secondary, but I definitely wouldn't sign him for more than a season or two if I was New Orleans.

Well, the Saints need a playmaker at safety, that's just plain fact, and Sharper definitely fits the mold. A quick look at his stats show that he's still got a little left in the tank though I'm not sure how much. He's a veteran and at the very least he could be a good presence to have in the locker room to help mentor younger safeties like Roman Harper and Chris Reis. The other good news is that he's durable. Over the course of 12 seasons, he's only missed nine games. Sharper would definitely be a quick improvement for the Saints secondary. If Payton, Loomis and staff can make the numbers work I would love to see Sharper in the black and gold for 2009.

What do you think?