Goodell's Lack of Greed is All Good

Share All sharing options for: Goodell's Lack of Greed is All Good 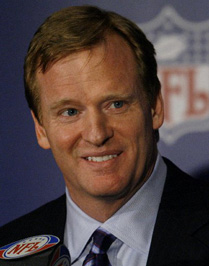 Though this news apparently broke a short while back, only yesterday did I learn that NFL Commissioner Roger Goodell voluntarily took a twenty percent pay cut in his $11 million salary and froze that salary for 2009 even though he's due an automatic raise. This comes amid the leagues announcement that they are cutting 169 jobs at the NFL's headquarters, NFL Films and the NFL Network.

Here's the part where I get all Bryant Gumbel on you. At a time when some Wall Street CEO's and top businessmen are still collecting hugely "shameful" bonuses amid tons of red ink, gaping deficits and exorbitant losses, Roger Goodell's decision to voluntarily take a pay cut must be lauded. While the likes of T.O., Pacman Jones and the entire Oakland Raiders franchise get continuous media scrutiny for their outrageous antics, the selfless acts of men like Roger Goodell too often get quickly brushed aside.

Sure, Goodell is still making a nice chunk of change but you didn't expect him to give up his entire salary did you? The truth is, in the greedy world of sports and big business a twenty percent pay cut is practically equivalent to applying for welfare. And how magnanimous does Goodell appear compared to the controversy surrounding MLB Commissioner Bud Selig's ballooning salary? As a business owner myself, I hate to see company leaders continue to prosper while their oraganizations are simealtaneously laying off employees and/or losing money. In my business, I don't get paid until everyone else gets paid first and to see that philosophy at work on a grander scale, while a rarity, makes me smile.

These recent decisions by Goodell prove to me that the NFL is in good hands even in these tough times and with him in charge I feel confident that the success and popularity of the sport we all love will only continue to grow. If we are all to believe that actions truly do speak louder than words than Goodell's decision should speak volumes. Stand proud Roger Goodell for you are a dying breed in a nation of ever-increasing greed.