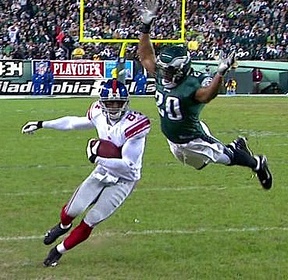 While there has been more than enough talk about the Saints trying to acquire a defensive back from the Philadelphia Eagles, most of this hasn't surrounded safety Brian Dawkins.

Dawkins is a 13 year vet (all of them in Philadelphia), a six-time pro-bowl safety (including this past year) and a likely Hall of Famer. In fact, no defensive back other than Darren Sharper has disrupted more passing plays since 1996 than Dawkins.

But before you get too excited about Dawkins as a possible option, listen to what Jason B from SB Nation's Eagles blog, Bleeding Green Nation, had to say.

Dawkins has made it pretty clear that he plans to return to the Eagles and head coach Andy Reid said he expects a deal to be done with him this week. I haven't heard any news in the past few days but the general feeling around town is that he'll be back and a new deal should come any day now. I haven't heard of any interest in Dawkins on the part of the Saints or really any other team.

That and the mutual love between Dawkins and the city of Philadelphia probably mean that he isn't actually going anywhere but we can dream can't we? Let's take a look at his stats while we're here.

A talented veteran with lots of experience and locker room presence would be awesome. Unlike other 35 year old NFL players, it appears Brian Dawkins still has a bit left in the tank as well, making him a very attractive option. But alas, I wouldn't plan on it happening. Probably best to just move on.