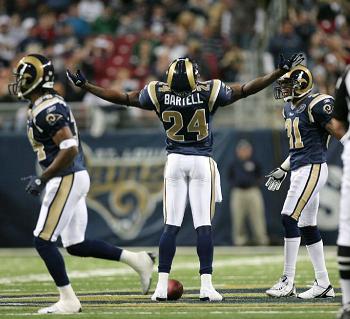 St. Louis Rams free agent cornerback Ron Bartell will be visiting the New Orleans Saints today. John Clayton of ESPN broke the story amid the hoopla of the free agency shotgun start last night. The Rams have been in talks with Bartell's agent since the Combine and list him as their priority but the market is hot right now for talented cornerbacks and Bartell is testing the waters, perhaps even using the Saints for leverage with St. Louis. This news should be pretty upsetting for Rams fans who would really like to see the Rams just throw money at Bartell and hold onto him.

How much would it cost to get Bartell?

Ahh, the magic question. The ESPN blurb says Bartell is looking for a $7 million dollar contract so that should be pretty accurate. A few days ago ESPN noted that Bartell's value was increasing with every high-profile free agent cornerback that gets signed. Because the Broncos have been linked as possible suitors, the Denver Post also took a stab yesterday and guessed it would take $8 million a year...

Should Bartell hit the free market tonight, it may take a five-year, $40 million contract with an $18 million guarantee to get him.

The Saints are not one of the teams in the league that have a lot of money to throw around this off-season. The Saints got $2 million under the cap when they released Patten and McAllister. Coupled with the $4 million salary cap expansion the other day and that should mean the team has around $6 million to work with. But with an uncapped year looming, they won't be able to back-load his contract so it will take a nice chunk of change up front to lure him in. I'm just not sure they can pull this off unless their planning on trimming some more fat.

Me likey. Pretty aggressive. I think Bartell has a lot of talent and I am trusting that he would work well in whatever system Gregg Williams is going to play. I don't know if the Saints have the money that Bartell is going to command but if they can make it work than go ahead and pull the trigger. There are cheaper alternatives out there. But this would give the Saints actual depth at cornerback (I'm a bit worried about McKenzie) and allow them to trade down in the draft, grab an extra pick and still nab a talented safety.

Here is his college scouting report via NFL Draft Scout.

Analysis: Positives... Confident athlete who loves to dare the quarterback to throw to his side... Shows quick feet and the ability to recover quickly when beaten... Does a very good job retaining plays and bringing them from the board to the field... Seems very alert to the plays developing around him... Generates a sudden burst on the ball once he is able to locate it... Closes quickly and covers ground with his acceleration... Showed marked improvement timing his leaps and going up for the ball (increased PBU total from six in 2003 to fourteen in 2004)... His quick feet and superb speed allow him to stay on the hip of the receivers through the routes and he has that shut-down mentality, evident by the fact he did not allow a reception in six games during the 2004 season... Shows loose hips in his backpedal... Breaks on the ball quickly and recognizes routes in zone coverage... Demonstrates explosion through his burst... Equally effective in press, man or Cover-2 alignments... Has the ability to flip his hips and run in transition... Does a good job of planting and coming back for the ball... Uses a tight shadow technique in man coverage and can read the quarterback to make plays on the ball... Adequate wrap-up tackler who is more effective working in space.

Negatives... Has good strength, but fails to demonstrate it in run force... Slow to come up and support vs. the run, as this is not a favorite part of his game... Has loose hips, but when he takes false steps, it slows down his turns... Needs to work on his footwork, as he fails to get good leverage or maintain balance in his backpedal... Has the ability to get off blocks, but does not use his hands well, causing him to struggle in attempts to disengage... Will wrap tackle, but will also revert to tackling on the side rather than squaring up... Has adequate hands, knocking down more passes that should have been interceptions... When he is not challenged, he will get lazy and lose concentration... At the Senior Bowl practices, he did not show the ability to get good reads like he did back at Howard and was jumping too early on his routes... He made too many arm tackles and showed inconsistency in his burst... Will compete for the ball in the air, but needs to finish more plays, as he shies away from contact at times.