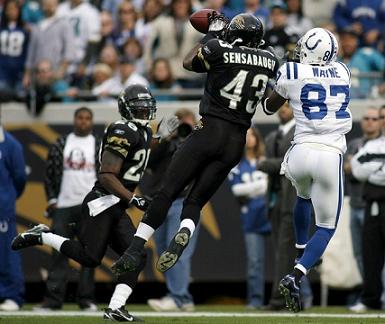 Is Sensabaugh's baggage worth seeing more of this? (Photo Source)

The Saints are continuing their search for possible free agent pickups today to help improve their less than stellar defense. Next up on the list is Jaguars safety Gerald Sensabaugh.

Sensabaugh had his best season in 2008 with 70 tackles, eight passes defensed and four interceptions. At only 24 years old, Gerald is right in the meaty part of his career and hopefully his best years lay ahead.

Of course there is the small issue of Sensabaugh's character. He has been arrested three times - twice in less than two years - the most recent of which occured just over a week ago. During this latest arrest police found a small artillery in his possession; a Bersa 380, an International Arms AK-47 and a Glock 22.

Believe it or not, the Jaguars defense actually ranked worse than the Saints in passing yards per game and passing yards per play last season. Sensabaugh's play, however, was one of the few bright spots. His character issues notwithstanding, Gerald Sensabaugh will be sorely missed in Jacksonville.

Sensabaugh would be a definite upgrade at safety. Than again, who wouldn't? He was a former player for Gregg Williams when he was with the Jags so just the fact that Williams wants to take a look at him should say a lot. If we're putting our trust with G-R-E Double G then we've got to think Sensabaugh is worth something.