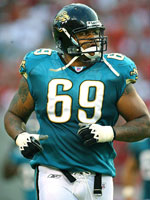 Another free agent making a visit to New Orleans today is Jacksonville Jaguars offensive tackle Khalif Barnes. Barnes was a second round pick of the Jaguars in the 2005 draft and worked his way into a starting role. A durable player who started every game last year, he is most noted for his run blocking ability. The Oakland Raiders have also expressed interest in Khalif and California might be his next stop on his free agent tour. No word yet on just how much money Barnes might command.

Tackle is not a position to screw around with when your entire team revolves around quarterback Drew Brees. Barnes is yet another player from Gregg Williams' former team, Jacksonville, but plays on the opposite side of the ball. Still, Williams might know something we don't. Now that Stinchcomb has re-signed with the Saints, Khalif might not be neccessary. Do we really need to be spending free agent money on an offensive line that allowed the fewest sacks in franchise history last year? They must be doing something right. Not sure how much money Barnes would want but there may be cheaper alternatives to upgrading the offensive line.