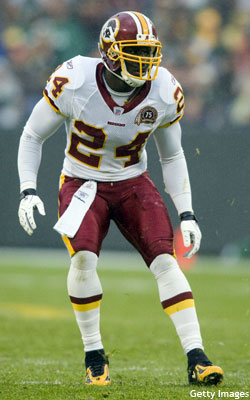 The Times-Pic quickly mentioned yesterday that there were unconfirmed reports the Saints were very interested in Washington Redskins cornerback Shawn Springs. Just in case there is any validity to this rumor I figured we ought to take a look at him.

The son of former Cowboys running back Ron Springs, Shawn is a veteran player who missed the better part of last season dealing with a calf injury and was released on Friday to help make cap room for the ridiculous spending spree the Skins have been on this weekend. He had this to say about the situation...

"They did what's best for the team, and I'm happy for them," Springs said in a telephone conversation. "I'm going to miss my friends there, but as long as it makes the team better, I understand. I'm a true fan of the sport."

As the Times-Pic article suggests, the Saints interest in Springs would make sense given his connection to Mickey Loomis during his days in Seattle and Gregg Williams during their time together in Washington.

Actually, I really like this one. Out of all the defensive players the Saints have been looking at so far as free agent acquisitions, Springs is the only one that's ever made an impression on me. I have always liked the Redskins secondary as a unit. Ideally I would like to see the team pick up some younger talent but Shawn Springs is still a top notch player. Plus, he's just a good guy. If the rumors of the Saints interest in Springs are true, he's the candidate I'm backing.